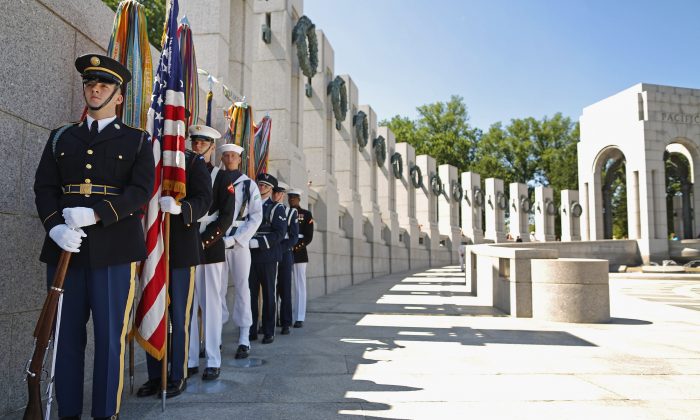 An honor guard prepares to participate in the 70th anniversary D-Day commemoration at the WWII Memorial on the National Mall June 6, 2014 in Washington, DC. On Oct. 10, Orange County veterans took an honor flight to D.C. to visit the memorial. (Chip Somodevilla/Getty Images)
Social Media

Veterans Day is Wednesday, Nov. 11, and many are wondering what’s open or closed.

The good news is that the vast, vast majority of retailers like Walmart, Best Buy, Target, Home Depot, Safeway, Public, Trader Joe’s, Whole Foods, Costco, and more are open. Many are offering deals.

Banks, however, are closed. This includes Wells Fargo, Bank of America, Chase Bank, Citibank, and the other major chain, except for TDBank, which is open.

The DMV, schools, libraries, and post offices across the U.S. are closed.  Veterans Day is a federal holiday, and that means the New York Stock Exchange and NASDAQ are closed as well.

So what is Veterans Day exactly?

It’s observed annually to honor people who have served in the U.S. Armed Forces.

“In order to insure proper and widespread observance of this anniversary, all veterans, all veterans’ organizations, and the entire citizenry will wish to join hands in the common purpose. Toward this end, I am designating the Administrator of Veterans’ Affairs as Chairman of a Veterans Day National Committee, which shall include such other persons as the Chairman may select, and which will coordinate at the national level necessary planning for the observance. I am also requesting the heads of all departments and agencies of the Executive branch of the Government to assist the National Committee in every way possible,” he explained, via the U.S. government’s website.

Veterans Day continues to be observed on Nov. 11, regardless of the day of the week it falls on.