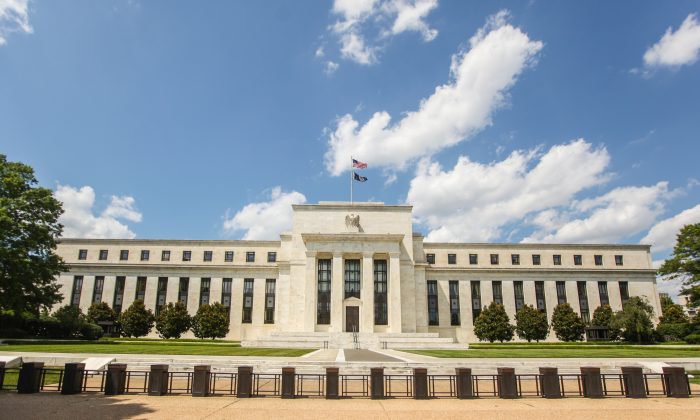 What’s Behind the Drop in the Dollar?

Despite the relative superiority of the US economy and higher interest rates, the greenback is losing ground
By Valentin Schmid
biggersmaller
Print

Just one month after the election of Donald Trump, in December 2016, The Economist published a cover story titled “The Mighty Dollar.” It said higher interest rates would lead to an even stronger dollar. Part of the magazine’s prediction came true—the Federal Reserve did raise rates—but the trade weighted U.S. dollar index is down 7.5 percent since the beginning of 2017. What happened?

“You have to go back to before the German reunification for interest rates compared to Germany to be wider. That is now reversing. They have gotten to an extreme and they are going back,” said Sean Corrigan, principal at Cantillon Consulting. The euro makes up the biggest part of the trade weighted dollar index, and it’s up 11 percent against the dollar this year, trading at $1.16.

Normally, money goes where it can earn the best risk-adjusted returns, and government bonds are the biggest market. The 10-year U.S. Treasury thus looks good at a yield of 2.2 percent, compared to its German counterpart at 0.5 percent.

However, the future counts more than the present in currency trading. Traders are betting that German rates will rise faster than U.S. rates as the European Central Bank (ECB) starts paring down its monetary stimulus, as hinted by ECB President Mario Draghi in June.

In fact, some traders are even betting that the Fed will have to reverse its rate hiking cycle.

“The U.S. recovery is stalling out now. Nothing is being done in Congress. We are not that far off, and the Fed is going to reverse,” said Corrigan.

Traders are betting that German rates will rise faster than U.S. rates as the European Central Bank (ECB) starts paring down its monetary stimulus, as hinted by ECB President Mario Draghi in June.

Corrigan also thinks U.S. stocks are relatively expensive compared to European and other stocks. “The U.S. stock market has become as expensive as it has been compared to other developed markets since we had floating rates. It is at the top of the range,” he said.

Those are two good reasons for moving capital out of the United States and into other developed markets, like Canada and Australia. The Canadian dollar (CAD) gained 7 percent against the greenback this year, and the Australian dollar (AUD), 10 percent. Both countries have also recently started hiking interest rates.

Daniel Lacalle, principal at hedge fund Adriza International Opportunities, thinks the reaction has been overdone and that there are significant risks to owning commodity currencies like the CAD, the AUD, and even the euro.

“Commodities are going down, they are oversupplied, and you want to be long a commodity currency? It makes no sense whatsoever,” he said. “The European Union getting much better is impossible. Italy and France continue to stagnate. Reforms that are being put to the market don’t happen. The big issues like excess public spending, overcapacity, and the demographic problem – all of those have not changed.”

He thinks that part of the dollar weakness is due to the world’s critical perception of Trump.

“The dollar is going down because of Trump. But it’s not true that the economy is going to take a massive hit from his policies. So far, they haven’t even done anything,” he said.