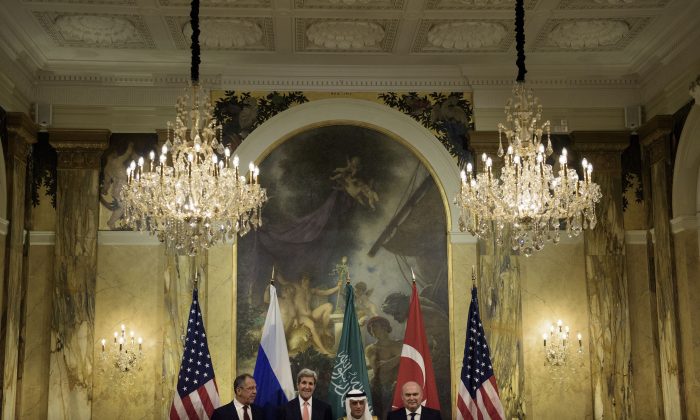 About 20 nations will meet for talks in Vienna starting Friday in an attempt to find a way to end the catastrophic five-year civil war in Syria, but the hurdles to peace in the region are nothing short of daunting.

All the major players are involved in the meeting—the United States, Russia, France, Germany, Iran, Egypt, Jordan, Qatar, Saudi Arabia, Turkey, and the United Arab Emirates—but the Syrian government and ISIS were not invited. The talks are especially of note being the first time Iran will join—both Iran and Russia support Syrian President Bashar al-Assad.

The fighting, which broke out in 2011, has left at least 250,000 people dead and displaced more than half of Syria’s population of 19 million, according to the United Nations. The conflict has also sent over half a million refugees to Europe.

In a speech on Wednesday, U.S. Secretary of State John Kerry admitted the talks aren’t going to be easy. “It’s not going to be automatic,” Kerry said, adding that it amounts to “nothing less than to chart a course out of hell.”

But he said, “The best opportunity we have is to try to come to the table and recognize there has to be the political solution that everybody has talked about,” according to a transcript of his speech at the Carnegie Endowment for International Peace in Washington.

Assad’s main ally, Iran, has been locked out of a series of international peace conferences. But even with Tehran at the talks, there are gigantic hurdles in ending the war in Syria, ranging from what to do with Assad to how to deal with ISIS and other terrorist groups.

Both Iran and Russia think Assad should stand for re-election to allow Syrians to decide his fate. Kerry has said that he has to go. “I got news: There’s no way that a number of the other countries involved in this coalition are going to let up or stop. It won’t happen,” he said.

To highlight Kerry’s comments about how difficult the talks will be, Saudi and Syrian dignitaries got into a diplomatic scuffle on Thursday. Saudi Foreign Minister Adel al-Jubeir told the BBC that Assad is a problem. “He will go either through a political process or he will be removed by force,” he told the broadcaster.

And even as Kerry and other dignitaries converged in the Austrian capital on Thursday, the Syrian government lashed out at Saudi Arabia for its role in the meeting. Syrian Information Minister Omran al-Zoubi said if Saudi Foreign Minister Adel al-Jubeir “has no clue how diplomacy and politics work, should keep his mouth closed, and keep his country out of a matter that is none of its business,” according to Syrian state television.

As for ISIS, Kerry said that if Assad were to stay in power, it would only serve to bolster the terrorist organization. “At the end of the day, nothing would do more to bolster the fight against Daesh [another term for ISIS] than a political transition that sidelines Assad so that we can unite more of the country against extremism,” he said.

Kerry, however, stressed that the United States and Russia shared “common ground,” and both nations want a united and secular Syria.

There has been speculation that Iran’s sudden invitation to the talks was brought about due to Russian airstrikes in Syria, which began last month.

On Thursday, Doctors Without Borders said there’s been an escalation in deaths from airstrike attacks on hospitals in Syria in the past month, which is roughly the same period Russia started its air campaign. The charity said 35 Syrian patients and medical staff have died and 72 were wounded in the provinces of Aleppo, Idlib, and Hama.