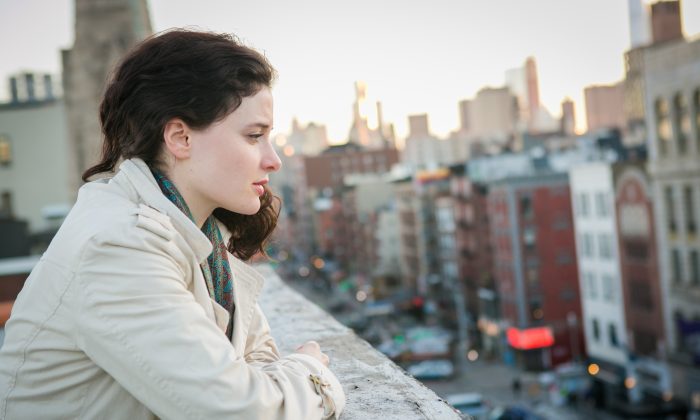 McKenzie Roese sees her collapsed apartment building up close for the first time. She lost all of her belongings during the seven-alarm East Village fire on March 26, 2015. (Benjamin Chasteen/Epoch Times
New York

NEW YORK—Smoke filled McKenzie Roese’s lungs as she stepped out of the 6 train station on Astor Place. She was not sure why she left work to go back to her apartment; she knew her building was ablaze. But she felt she needed to be there with her home as it slowly shriveled away.

The police would not let her go near the site of the inferno. So Roese stood two streets away and watched. She stayed there for one hour, crying as the flames performed their menacing dance.

The police would not let her go near the site of the inferno.

Roese, 24, was one of the dozens of East Village Manhattan residents who had lost their apartments during a seven-alarm fire on Thursday, March 26. Fifteen apartments were destroyed; three buildings collapsed; two people died.

The explosion and fire sent 22 people to the hospital. Two people had burns in their airways, while another was unconscious and in critical condition. One hundred twenty-five adults and five children registered for Red Cross emergency services.

The cause is suspected to be the result of an illegal siphon of the gas pipe that leaked and ignited inside Sushi Park, the restaurant directly below Roese’s apartment.

Five days after the disaster, 75 trailer loads of debris were removed. And that was only half of the debris at the site. The cleanup is currently on a hiatus as FDNY marshals and the NYPD Arson and Explosives Unit investigate the cause of the explosion.

During Roese’s wait, she realized that the experience has taught her to always appreciate the small things in her life, for during an ordinary moment on an ordinary day, one could lose everything.

The day began like any other for Roese. She had gone to a friend’s party the night before, and pressed the snooze button that morning before getting up.

She took a shower, quickly dressed in some black pants and a striped shirt, and boiled eggs for breakfast.

As she was leaving, she paused at the door and turned to grab a scarf. It was her favorite scarf, a navy one with golden swirls.

Then, she left her apartment without looking back.

Roese arrived at the Kepler Group’s office in Midtown, where she does digital marketing.

While Roese was sitting in a meeting at 3 p.m., talking about mobile advertising and its latest trends, the gas pipe at Sushi Park burst.

At that moment, Nicholas Figueroa, 23, was on a date with a girl he really liked. Figueroa died instantly during the explosion, right after he paid $13.04 for the meal.

Sushi Park’s storefront collapsed, but from the outside, the extent of the damage was not clear.

Two small dogs were flustered by the clamor and fell over. The man who was walking the dogs paused, stared in confusion, and hurried away with the animals.

There was an ear-splitting alarm as clusters of debris landed throughout the street, a little bit here, and a little bit there. It reminded one of a post-apocalyptic scene.

“I need help,” a woman called out. There was panic in her voice. She was stuck on the fire escape. A small crowd gathered beneath her to encourage her.

Someone called the fire department at 3:17 p.m.

The firefighters arrived three minutes later and saw a scene they did not expect—the facade of Sushi Park blown across the street.

People gathered on the adjacent street. They watched with calm faces as firefighters scrambled out of their trucks.

For the first 15 minutes, firefighters went inside to search for victims.

A man said in Chinese, “It looks like there was an explosion. But it seems that everything is all right.”

But it was not all right.

The firefighters had to come out when buildings 123 and 121 on 2nd avenue began to collapse.

The fire grew and filled the buildings, to the point where each apartment window looked like miniature gates of hell.

The blaze continued to grow larger even as more firefighters arrived. It took 250 firefighters, from seven firehouses, to eventually put out the fire. But not before the fire burned into the next day.

More than 2 miles away, from the Epoch Times office in Midtown West, one could smell the smoke and it caused an editor’s eyes to water.

Seven-alarm fires are not common, FDNY spokesman Jim Long wrote in an email, but they are not rare either. In February, a seven-alarm fire burned through a storage facility in Williamsburg, Brooklyn. FDNY has dealt with “a handful in the last several years,” he wrote.

The mobile advertising meeting ended and Roese checked her phone. There were 30 text messages and 10 missed calls.

People she hadn’t spoken to in some time, people from college, from high school, from home, were asking her if she was safe.

She began to respond to each, yes, yes she was all right. Then she stopped and checked the news.

Her very own apartment was in flames. Her roommates’ bedrooms were in flames.

She had always thought of herself as a woman with agency. But there was no action to take at that moment.

Roese read more articles. They reported the same news with the same photos of her apartment on fire. She started to believe it.

Images of her dearest possessions popped into her mind: the rosewood bracelet she bought from the woman in Burma with the really sweet face; the journals she had kept since age 10; the necklace her parents gave her when they dropped her off on her first day of undergrad.

Her latest diary, the black one that recorded her big move to New York just eight months ago, was most likely on fire at that moment.

The memorabilia from the six months she spent studying abroad in Australia: gone. It felt like a part of the experience went away with it too.

“The memories will live on. But in some ways, it’s as if they never happened,” Roese said.

The next day was Friday. Roese forced herself to go to her building, cradling a dwindling hope that she could salvage a few of her items.

Sometimes Roese’s roommates worked from home on Friday’s. To think, if this had happened on a Friday. No, she must not think like that, she told herself.

The memories will live on. But in some ways, it’s as if they never happened.
— McKenzie Roese, victim of the East Village gas explosion

When she arrived she realized her building had collapsed. She had truly lost everything.

With no room for shame, Roese began to cry. The cleanup crew ignored her as they hurried to-and-fro with their shovels.

“Are you all right? Lets get you some coffee,” Roese recalled the photographer saying.

The photographer took her to a coffee shop and sat with her.

Amid this tragedy, Roese was touched by the kindness of strangers. Many have donated to her GoFundMe fundraiser.

It helped her stay positive. “It’s going to be okay,” Roese said. “I’m optimistic.” At least she has her favorite scarf.