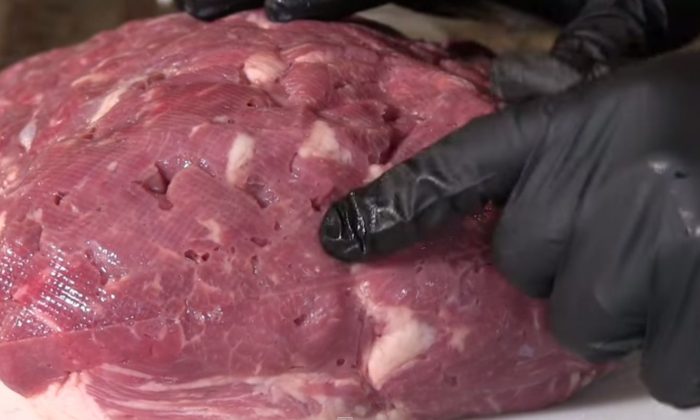 What is ‘Meat Glue’?

Have you ever heard of transglutaminase, also known as “meat glue?” You’ve probably eaten it before.

Transglutaminase is used to fuse proteins together to form one connected piece of meat.

As a video from Ballistic BBQ notes, it’s a fairly sketchy practice:

The video’s uploader takes issue with restaurants passing off scraps of meat that are fused via transglutaminase as authentic pieces of steak.

“I’m not a fan,” he says. “Some people have never heard of this stuff… I think it’s important to know what we put in our bodies, which is why I decided to produce this video,” he wrote in the comments section.

When he points to the formed piece of meat, you can see where the two slabs are fused together:

But after he cuts it into pieces, it looks like a normal steak:

It looks even more convincing after it’s grilled:

“If didn’t know any better, I’d think it was steak,” he said after giving it a taste test, adding that “it’s nice.”

He made the video because there’s “deception going on out there,” he said. “I really have a problem where a restaurant or a dining hall is trying to pass off” fused together “scraps” of meat as real steak, he added.

A few years ago, ABC did a report on meat glue, which said, “The outside of a piece of meat comes in contact with a lot of bacteria making its way from slaughterhouse to table. Usually cooking a steak on the outside will kill all that off. The center of a single cut of steak is sterile, that’s why you can eat it rare. But glued pieces of meat could contain bacteria like E. coli on the inside.”

According to the 2012 report, the FDA-approved additive used in places that mainly serve meat in bulk, including restaurants.