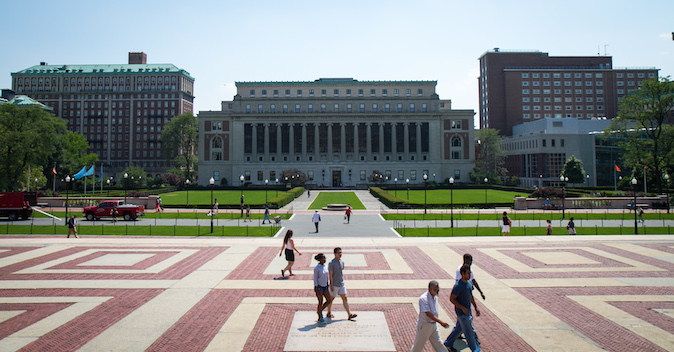 The campus of Columbia University with the Butler Library in the foreground in Manhattan on June 21, 2012. (Benjamin Chasteen/Epoch Times)
New York

What Happens on Campus

The university experience isn’t always what it promises to be. There is the expectation of hard work, tests, and a lot of late nights, but nobody goes away to college expecting to get sexually assaulted.

The harsh reality is that one in five women attending college fall victim to this crime, according to an April 29 report from the White House Task Force to Protect Students from Sexual Assault.

One of the task force’s tactics is to conduct a trial program with colleges across the country to gauge how bad the problem is. Its “campus climate survey” is voluntary, and will be done next year. Then the Justice Department will evaluate and refine the survey with Rutgers University’s Center on Violence Against Women and Children. At the end of the trial period, the government will decide if it needs to legally require schools to conduct a survey in 2016.

Nice idea, good effort, but what happens in the meantime?

According to media reports and a campus blog, the list was written on the walls of several women’s bathrooms around campus, with the title, “Sexual Assault Violators on Campus.” The handwritten notes were quickly scrubbed off, only to reappear.

Then stacks of fliers with a four-person list began to circulate around campus, also left in bathrooms. The fliers stated that three men on the list had been found “responsible” by the university for sexual assault, and that a fourth person is a “serial rapist.”

Some of the reaction to what has been described as “vigilante justice,” has been visceral. Male students reacted that they felt targeted as a gender, and those listed said their privacy was violated.

The bigger question, though, is why women on one of the most celebrated university campuses in the world feel they need to deal with a very real problem this way. Until something becomes personal, it’s hard to pass judgment on how victims choose to deal with their predicament, and in this case, protect themselves.

Columbia has refused to comment publicly on the issue. But whether it’s a list on a wall or a federal legal complaint, some students clearly don’t feel enough is being done. On Tuesday, at least one alum decided to hit the university where it hurts: its wallet.

Wrote one alum in a photo circulated on Twitter, “Please tell the university president that I look forward to donating once Columbia has taken action (not words) to protect student victims of sexual assault.”