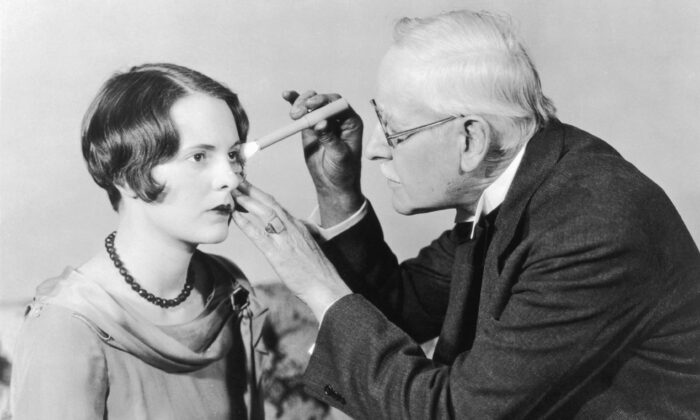 A woman undergoes an eye examination, circa 1925. (Photo by FPG/Hulton Archive/Getty Images)
Opinion

What Do You Do If You Don’t Trust Your Doctor Anymore?

Like it or not—and I certainly don’t—the COVID-19 pandemic changed practically everything about our lives.

One of the traditionally most satisfying, even heartwarming, of relationships that has been majorly affected is doctor–patient.

On or about New Year’s, I wrote:

“Do you trust your doctor anymore? Honestly?

“I don’t mean Dr. Anthony Fauci. How can anybody trust him, with all the prevarications, constant shifts in policy and deceptions, not to mention denying U.S. taxpayer support for gain-of-function research at the Wuhan Institute of Virology and other aspects of the doctor’s dark past revealed in great detail in Robert F. Kennedy Jr.’s book?

“I’m talking about your own personal doctor, the man or woman who has been your friend and trusted counselor for years, maybe decades. How do you feel about that person? Has it changed?”

Of the 465 people who wrote answers in the comments section, easily 90 percent were upset—or worse, sometimes considerably worse—about the decline in this once-treasured relationship.

It was a select group of The Epoch Times readers responding, and subject to whatever gloss you would give that, but I suspect they aren’t alone in their discontent. You hear it from people everywhere you go.

Nevertheless, since I wrote that article, that discontent has only grown as we have learned from Drs. Robert Malone, Peter McCullough, and others more about the degree to which we were deceived.

More is undoubtedly yet to come after a judge in Texas decreed that it was of “paramount importance” that the FDA produce 55,000 pages every 30 days of Pfizer COVID vaccine documents until all are released. (The FDA wanted 75 years to do this.)

So what does one do?

Does one throw away the family doctor with his/her degree, if they have it, from Harvard–Yale–Vanderbilt–Michigan medical schools or some other august institution, not to mention their affiliation with some supposedly great hospital listed high on the U.S. News & World Report’s rankings such as Mass General, UCLA, Mt. Sinai, or wherever?

It was those same institutions, working at the behest of our government, that carried out all the COVID decrees and mandates. They did so most entirely unquestioningly because so much of their funding came from that same government, via Medicare; yet more government money came if COVID was listed as the cause of death, making mortality statistics dubious at best.

These institutions were so obedient to the government (terrified of it, actually), they have restricted freedom of medical speech from their doctors, the case of Baylor suing McCullough being the most notorious example.

Ironically, the problem of our great medical institutions is quite similar to our higher educational institutions. They both rely on huge government stipends (some of it coming, more or less surreptitiously, from another government whose initials are CCP).

Still, do you cut your relationship with your doctor merely because they—most likely to protect their jobs and livelihood—obeyed the diktats of the institutions for which they worked?

What if something happens to you or one of your loved ones that necessitates a remedy only available with a modicum of confidence at those institutions, such as open-heart surgery?

It’s not an easy situation.

With that in mind, I attended a conference for a few hours on March 13 at Nashville’s Opryland, where many alternative medical techniques were on display. Some seemed interesting, but I had no way of evaluating which were real and which were, well, the kind of thing you might find at one of those neo-’60s wandering Renaissance Faires, basically somebody’s hobby that they insist is a cure-all for humanity.

Some of the doctors present were practitioners of something I have come to know as functional medicine. WebMD describes functional medicine doctors as those who “use specialized training and techniques to find the root causes of complex illnesses. They may investigate multiple factors causing a condition, or they may look into multiple conditions causing one symptom.”

Fair enough, I guess. But, at the same time, I see ads that read “Functional Medicine Training—Finish in as Fast as 10 Months.” Hmmm…

Wikipedia, not surprisingly, is less flattering to functional medicine, describing it as “a form of alternative medicine that encompasses a number of unproven and disproven methods and treatments.” (Sort of like Wikipedia itself these days.)

Once again, it seems We the People are on our own. We are going to have to make our own medical determinations for ourselves going forward.

Maybe, it will be a combination of methods, alternative and conventional. (I took ivermectin, obtained “underground,” when exposed to COVID, and never told my doctor. I never, to my knowledge anyway, contracted the disease.)

One thing we have learned, if we didn’t know it already, is that anything close to socialized medicine is horrific for our health and virtually all aspects of our lives, unless we enjoy being controlled and turned into automatons. As with everything else, the less government in health care, the better.