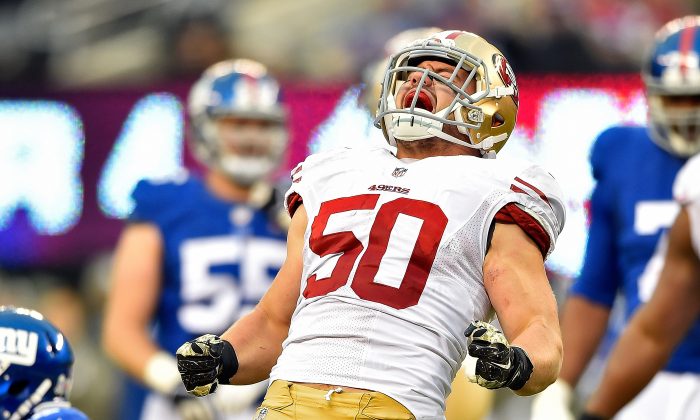 Chris Borland #50 of the San Francisco 49ers celebrates after a tackle against the New York Giants in the fourth quarter at MetLife Stadium on November 16, 2014 in East Rutherford, New Jersey. (Photo by Al Bello/Getty Images)
NFL

What Did Tim Ryan Really Say About Chris Borland?

Former NFL player Tim Ryan is being criticized for some comments he made about the Chris Borland situation, but some people are taking his words out of context. Some fans are even calling Ryan to be fired from his job as a football analyst.

Ryan went on KNBR today after Borland announced his retirement after on season in the league, mostly praising Borland for his thoughtfulness in his decision. The 24-year-old Borland said he retired because the health risks of an NFL career outweighed the benefits.

“Big props to Chris. I’ve got a lot of respect for him. The selfish side of me is pissed that the 49ers are losing another quality player. . . . Chris was and still is fantastic,” Ryan said during the interview.

“The risk isn’t worth the reward for some guys. You may call that superior intelligence because I never would have made that decision, but that cat [Borland] has got a little more intelligence than I do.”

That part about quitting? Ryan was just making a distinction between retiring and quitting, referencing 49ers linebacker Patrick Willis, who recently retired after playing eight seasons.

Ryan emphasized that he views Borland’s decision as quitting, as opposed to retiring, because the word “retire” generally refers to people who have a long career not a one-year one.

“This isn’t punitive on Borland, and I love the guy and I want to see him play. Patrick Willis retired. Chris Borland quit,” Ryan said.

Ryan didn’t specifically call Borland a quitter and also said that he “loves the guy” and that Borland is “smart” and is “going to have a great life.”

See some reactions to Ryan’s comments below.

Somehow, Tim Ryan says the word “quit” and he is accused of calling Chris Borland a “quitter.” And ppl want him fired. Absurd #Niners #NFL

To bad Tim Ryan was essentially forced out of the league and Chris Borland left on his terms.. pic.twitter.com/OzPNUPIx0o

@49ersHub Couldn’t believe he said it. About threw my phone thru the window.

As a 49ers fan, Tim Ryan you disgust me and should be fired for your lack of respect of another man’s personal choices. Willis did same.