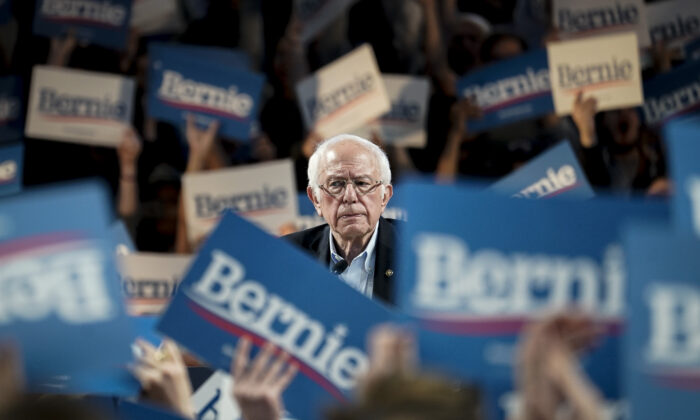 What Bernie Sanders Means for America

Whatever happens from here, Sen. Bernie Sanders (I-Vt.), an avowed socialist, has just won the first three contests for the Democratic nomination for president. What has already happened should cause shockwaves around the nation, but what could happen from here could change America forever.

Republicans are gleeful at this development. Politically, a Sanders nomination is probably the best thing that could happen for the Republican Party. Sanders is not friendly, not inviting, doesn’t speak a language of hope, and won’t be able to reach a broad-based coalition across the nation. He will not play well in rural states or across the South and West.

Much of the nation, even some who don’t much care for President Donald Trump’s rhetoric or policies, will have difficulty pulling the lever for a man who identifies as a socialist, who wants to nationalize health care, who honeymooned in the Soviet Union, and who has a record of saying outlandishly positive things about socialist dictators around the world.

With key Senate races on the ballot this year and lots of new House Democrats needing to defend their seats for the first time, the control of Congress is also very much in play. And with the 2020 census underway, the future of the House of Representatives is also on the ballot in the races to control the legislatures of the 50 states. It’s those legislatures that will redraw the district boundaries that will inform our representation for the next decade. Having an avowed and divisive socialist at the top of their ticket would likely endanger Democrats all the way down the ballot.

While Democratic primary voters are rallying to Sanders, the Democrats in swing districts who will have to win independent voters and dissatisfied Republicans are hunkering down, readying to take the fire. Except for strategist James Carville, who has never shied away from saying impolitic things in colorful ways, the Democratic establishment seems paralyzed. They know the dangers of a Sanders nomination, but are fearful of offending the liberal base that makes up the Sanders coalition.

The professionals in the Democratic Party know well the situation they’re in. If Sanders is their nominee, the fall elections could be as devastating for the party as the recent UK elections were for the Labour Party. In those elections, Jeremy Corbyn moved his party significantly to the left and paved the way for a historic landslide for the Conservatives under Boris Johnson. On the other hand, if they organize to keep Sanders from winning the nomination (yet again), his base might explode with anger, and they’ll lose the energy the party needs in the fall.

Looking at the months to come, we’ll have much to watch and much to ponder. Will the Democratic establishment engage to try to deny Sanders the nomination? Will the other candidates drop out and rally behind one who can take Sanders on? Will Sanders or anyone else get enough votes to win on the first ballot at the convention? If there’s a brokered convention, who will the establishment delegates rally to?

Will disaffected Sanders delegates disrupt the convention? If Sanders is kept from the nomination, will he bolt the party and run as a third-party candidate? Will another Democratic nominee placate Sanders by moving to the left on issues such as taxes and health care and, thereby, out of the mainstream of the national electorate?

It’s going to be an interesting period in American politics. Those of us who are political junkies will have much to watch; the implications for our country couldn’t be higher.

Despite the conventional wisdom I stated above, can Sanders actually win the presidency? Let’s not discount that potential. Nine months is an eternity in American politics. Lots of things can happen, and a slight misstep or scandal can change everything. How many of us, for instance, thought Donald Trump would win the Republican nomination, let alone the presidency at this point in 2016?

Republicans should beware. Sometimes the person you think you want to run against ends up as your worst nightmare. That happened to the Democrats in 1980, when they wanted Ronald Reagan and in 2016, when they wanted to face Donald Trump. Nothing can be taken for granted.

Whatever happens from here, America should be shocked that one of our two major parties is this close to nominating an avowed socialist for president of the United States. That fact says much about how far the base of the Democratic Party has moved to the left.

It also shows what a poor job we have done of educating our fellow citizens about economics, freedom, and the history of socialist economies and dictatorships of the 20th century. Freedom, as Reagan so often reminded us, is always only one generation away from being lost.

Gary L. Gregg is host of the great books podcast “Vital Remnants” and author of more than 10 books on American politics including “Securing Democracy: Why We Have an Electoral College.”