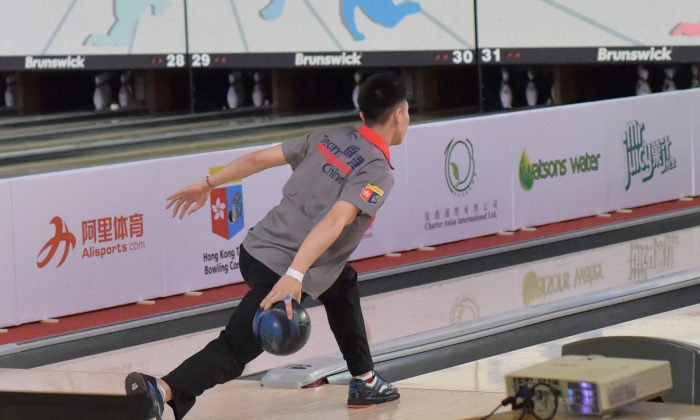 What a Difference a Day Makes: From Disappointment to Champion

HONG KONG—On Sunday July 17, Michael Mak was disappointed to lose the final of the 42nd Hong Kong Open, the Hong Kong Cup, finishing as runner up to Ryan Lalisang of Indonesia. On the very next day Mak triumphed over another Indonesian bowler Hardy Rachmadian in the 2016 ABF Tour, Hong Kong Final, winning the extra frame tiebreaker after finishing the 1st 10 frames tied at 209 pins.

Mak also had a very close semi-final match against fellow Hong Konger, Rickle Kam, winning by 1 pin, with the last roll of play. Kam was leading by 10 pins going into the 9th frame but left two almost impossible pins after his first ball, leaving both pins standing and then falling 12 pins behind. But Kam recovered to strike in the final 10th frame and with the new scoring system in operation, left Mak a target of 19 pins to win in the his final frame. Mak left 1 pin standing after his first bowl, but hit the remaining pin with his final bowl to edge the match. After having the game in his grasp, Kam was upset to let the game slip, because of one unfortunate bowl.

Over the last week, local Juniors, mainstream and senior bowlers have been battling it out through qualifying competitions of various divisional tournaments of the 42nd Hong Kong Bowling Championships, at the South China Athletic Association Bowling Centre (SCAABC), in Causeway Bay. These competitions culminated with the finals on Sunday July 17, including the prestigious Open Masters competitions for both men and women.

After the Stage II finals of the Open Masters, the top 6 men and the top 6 women go into Step Ladder Finals. For the men event Hong Kong had 2 finalists Hong Kong’s Top Bowler, Michael Mak and Wicky Yeung. Wicky Yeung won his first step ladder but was eliminated in the second step by Mak who went on to meet Ryan Lalisang of Indonesia in the final. But Mak had a poor round for him and finished as runner up.

In the Women’s Open Masters Final, after the Stage II finals the top 6 comprised 3 Indonesians, 2 Koreans and one player from Malaysia. These were whittled down to the experienced Malaysian player Esther Cheah and the top seed from the Stage II finals, Lim So Hyun of Korea. Challenger Cheah won the match in 2 straight sets 209-204 and 210-179.