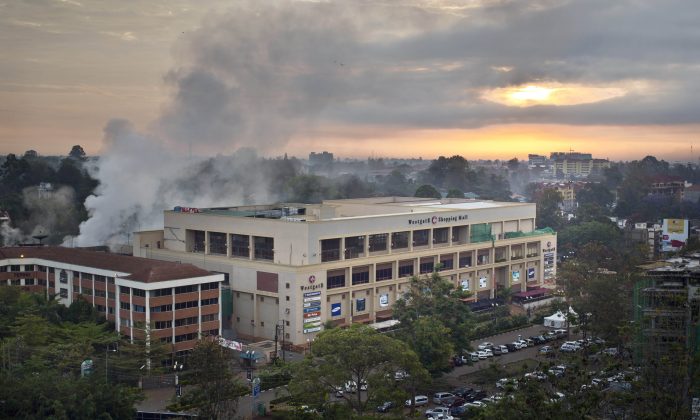 Westgate Mall Attack the First of Many, Expert Fears

The deadly Westgate Mall attack in Nairobi may only be the first of many. It is a sign of al-Shabab’s refocused efforts as a fully fledged terrorist outfit, according to a Somalia expert.

When Kenyan and Ethiopian forces entered southern Somalia in late 2011 to oust al-Shabab from its strongholds, many commentators feared that they might, in the long run, cause more problems than they solved, and that al-Shabab would keep posing a serious threat in the region.

One of those commentators, who also spoke to the Epoch Times at the time, was J. Peter Pham, director of the Africa Center at the Atlantic Council, and more recently co-author of the book “Somalia: Fixing Africa’s Most Failed State,” which was published earlier this year.

“It gives me little satisfaction to have been right,” Pham said.

What has happened, according to Pham, is that after al-Shabab was driven from much of its territory in southern Somalia, radical elements with a more “international” view, as opposed to Somalia-focused allies from various clans, became dominant. One such hard-liner is emir Ahmed Abdi Godane, who also goes by the name Abu Zubeyr, and he has been eliminating rivals within al-Shabab who don’t share his agenda.

Since they no longer have to focus their attention on governing actual Somalian territory, Godane and other hard-liners have been able to consolidate their efforts around being more of a “pure” terrorist organization. They are now therefore in a better position to mount terrorist attacks of the Westgate-Mall type, and Pham fears that more will follow.

“The attack is probably just the first of what is likely to be several from al-Shabab,” Pham said. “An operation like the Nairobi attack could not have taken place without reconnaissance and careful planning, both of which required a presence on the ground for an extended period prior to the attack itself. So clearly al-Shabab has a local operational unit and probably an extensive support network within Kenya.”

He added, “Somalia’s neighbors ought to be asking themselves which of their countries are also hosting active al-Shabab cells and what might come next.”

Meanwhile, fears are mounting in some quarters that the Westgate Mall attack will lead to problems for the many Somalis in Kenya, many of which are refugees.

Anthropology professor Catherine L. Besteman of Colby College is very familiar with the complicated dynamics in the border area between Kenya and Somalia, and she is mainly worried that there might be a heavy military response against Somalia from Kenya. So far, she cannot report any direct and worrying signs of ethnic tensions, however.

“From preliminary reports it sounds like there has been support for the local Somali population in Kenya from authorities and others,” she said. “But of course that situation could change quickly. You might also look into outpourings of support from Kenya’s Somali population for those caught in the attack.”

Moreover, while al-Shabab officially frames Westgate Mall as a response to the Kenyan incursions into Somalia, threatening to carry out more attacks, there have been reports that the attack was a rather international affair. A tweet, purportedly from al-Shabab, claimed that as many as 6 of the 17 attackers hailed from the United States, and British media has reported that the so-called White Widow, British-born Samantha Lewthwaite, was also part of the operation.

“While Godane and other al-Shabab leaders have sought to justify the attack in Nairobi as a response to the Kenyan intervention and continuing occupation of parts of southern Somalia, the truth is that they had long harbored ambitions to be more than a Somali sideshow to the larger global jihad,” Pham said.

He also pointed to the fact that al-Shabab has been far more successful and consistent in recruiting U.S. citizens and residents as fighters and supporters than, for instance, al-Qaeda.

“It has a reach into America that should have been and urgently needs to be a priority concern for intelligence and law enforcement officials,” he said.