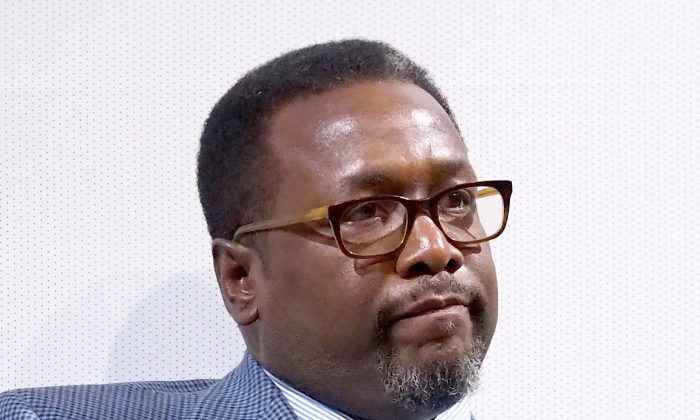 Actor Wendell Pierce, best known for his role in “The Wire,” was arrested at 4 A.M. at Atlanta’s midtown Loews Hotel after he allegedly attacked Bernie Sanders supporters and then tried to force his way into one of the women’s room.

Pierce is best known for playing Detective William ‘Bunk’ Moreland from HBO’s “The Wire.” He also played Civil Rights leader Horsea Williams in the movie “Selma” and plays Clarence Thomas in HBO’s upcoming series “Confirmation.” He was arrested on simple battery and released on $1,000 bail.

The incident started when Pierce and his girlfriend ran into Maggie Baca, 29, and two of her friends in the hotel hallway and both parties began discussing politics, which “got Mr. Pierce upset,” according to the Atlanta Police Department report obtained by Epoch Times.

TMZ reports that Pierce is a Hillary Clinton supporter, and also that when the actor found out that the group were supporting Bernie Sanders, he allegedly began to push Baca. This prompted the group to walk back to their hotel room when Pierce “stuck his arm in the door” and “tried to enter the room.”

Baca and “her friends tried to push Pierce out when he began to hit her in the head and grab her hoodie, ripping the hood off,” according to the police report.

Both Pierce and Baca refused medical service but were photographed for evidence.

Authorities made a statement following the incident saying “The incident did not rise to anything significant, so no special notification was made… it was treated like any other arrest a patrol officer conducts. Mr. Pierce made no indication he was famous nor did the officer inquire.”

Following the arrest, Rutgers University Newark announced that Pierce would be replaced as commencement speaker by journalist Soledad O’Brien. The University made a statement:

Fearing Trump, Some Democrats Up Pressure on Sanders to Exit

“Newark (RU-N) was informed by actor and humanitarian Wendell Pierce that in order to assure that commencement 2016 will be a celebration of the accomplishments of its students free of distractions, he is declining to join RU-N and consequently must decline the conferral of an honorary degree,” a press release about the event said. At the same time, RU-N is pleased to announce that award-winning journalist, documentarian, news anchor, and producer Soledad O’Brien will address the Class of 2016.”