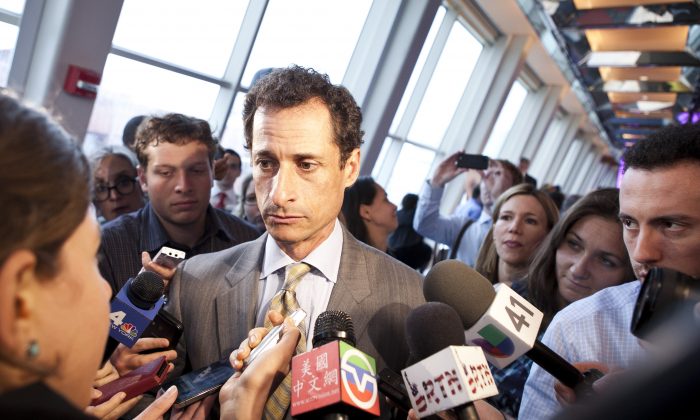 NEW YORK—His campaign is a mere 14 days young, but Democratic Mayoral candidate Anthony Weiner has proven time and again he is unafraid to differ on the issues from his competitors.

On Monday night, he did it again.

At a mayoral forum hosted by the Council of Urban Professionals, the issue of diversity came up, specifically related to the candidates’ future administration.

“How will you, as mayor, ensure diversity is a priority in your administration?” asked moderator Sally Kohn, a columnist for Salon.com and progressive Fox News commentator.

City Comptroller John Liu, former Comptroller Bill Thompson, and Public Advocate Bill de Blasio all took shots at Mayor Michael Bloomberg’s administration for what they dubbed a lack of diversity, claiming their administration would be much better.

City Council Speaker Christine Quinn stayed away from taking shots at Bloomberg, a man she still works closely with at City Hall, but also vowed to be diverse, not only in her administration, but also with regard to the awarding of city contracts.

Then it was Weiner’s turn. As one of only two white males in the race, the diversity answer seemed to be a given. But, Weiner’s answers are like boxes of chocolate: you never know what you are going to get.

He explained when people come from different places and backgrounds, the ideas generated are more innovative.

“You could have a whole bunch of Ivy League white guys but you are more likely to get more interesting output if you have a diverse set of staff around you,” Weiner said.

Kohn concluded the round of questioning by asking if the candidates would pledge to best Los Angeles’ mayoral cabinet’s diversity of 48 percent. (Kohn said the current administration sits at 30 percent).

Asked after the forum why he kept his hand down, he replied, “I am going to see what I can do to break free from the bonds of stupid questions.”

Another reporter asked about a 2005 question at a mayoral forum in Chinatown in which Weiner also refused to pledge to hire a high ranking Asian, wondering if this was similar.

“I just don’t think it is particularly informative and it is not the way I think,” Weiner said.