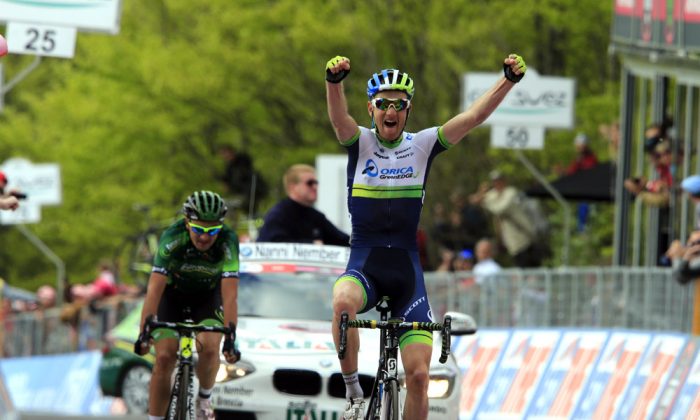 Pieter Weeening crosses the finish line at Sestola to win Stage Nine of the Giro d'Italia, May 18, 2014. (greenedgecycling.com)
Cycling

Orica-GreenEdge rider Pieter Weening attacked from a 14-rider breakaway to earn the win in Stage Nine of the Giro d’Italia, his second career Giro stage win and the third for his team in this year’s Giro.

Weening attacked on the descent of the second of three categorized climbs, 18 km from the finish of the 172-km stage. He was joined by Europcar’s Davide Malacarne, and this pair was never seen again by their pursuers until the race was done.

Weening and Malacarne worked together up the final Cat 2 climb, which started ad ten percent and ramped up to 13 in the middle. The final four km averaged only four percent, giving the leading pair a chance to rest their legs and rpepare for the final sprint.

Weening and Malacarne worked until the 600-meter mark, when they both slowed, trying to force the other to make the first move. Finally Malacarne made his attack, 250 meters from the line; Weening followed, eased to the inside on a right-hand bend and overtook the Europcar rider 100 meters from the finish.

Domenico Pozzovivo finished third. The Ag2R rider attacked the peloton four km from the summit, where the incline lessened, and ended up gaining thirty seconds on race leader Cadel Evans of BMC.

“The guys weren’t working perfect in the group,” Weening told Cyclingnews after the stage. “It went slightly uphill and people were taking the wrong side of the round-about. I went on the other side and it was the right timing.”

“I thought maybe we had to try to go before the climb. Malacarne came back and he was really strong. It was a steep part in the last climb, I made a fast speed but I couldn’t drop him. I waited until the last few hundred meters—I could gamble a bit in the last hundred meters.”

For Orica GreenEdge, the first nine stages have been better than they could have hoped for. Michael Matthews held the pink jersey for seven stages after Orica won the Stage One team time trial, and won Stage Six, surprising many with his climbing ability. Weening’s win in Stage Nine was an added bonus.

Stage Nine started with intense action as attack after attack was formed and reabsorbed. None of teh GC contenders were willing to see anyone dangerous get up the road. With a rest day following, riders were free to dig deep into their reserves, and none of the GC contenders wanted to see a rival gain a big advantage.

The 172-km stage included three categorized climbs in the final third: the Cat 3 Sant’Antonio, the Cat 4, and the final Cat 2 ascent to Sestola.

Major teams which didn’t manage to get a rider into the break were Garmin-Sharp, Giant-Shimano, FDJ, BMC, Tinkoff-Saxo, Astana, and Omega Pharma-Quickstep.

This group looked to have a chance over the first climb, with the gap around seven minutes at the crest.

The final climb was listed as a Category Two, 16.5 km long with an average gradient of 5.5 percent. The climb was not a straight, simple steady uphill: the beginning was a tough ten percent, and the middle ramped up to 13 percent, but there were small dips and flats interspersed. The final several kilometers were much more gradual, so a rider who could push through the steepest section could hope to survive to the line.

The break shattered on the second climb as first Belkin’s David Ttanner and then Orica’s Pieter Weening attacked the break. Tanner faded, and Europcar’s Davide Malacarne joined Weening ahead of the break, which was now the chase.

The peloton pushed on, slowly shrinking the gap, but never really trying to catch the breakaway riders, none of which were General Classification contenders.

Cadel Evans spoke to Cyclingnews about the stage: “The guys controlled things until the move went. There was a bigger selection which was in our favor because we could control the group. Guys were putting everything on the line and gambling a little more.

“We have to be satisfied with our work so far. I’m very happy with our team and they put me in the position I’m in now. I’m very proud of my guys and we will rest well tomorrow.”

Going into Monday’s rest day Cadel Evans keeps the Maglia Rosa with a lead of 57 seconds on Omega Pharma-Quickstep’s Rigoberto Uran and 1:10 on Tinkoff-Saxo’s Rafal Majka, with Domenico Pozzovivo now fourth, a further tens econds down.