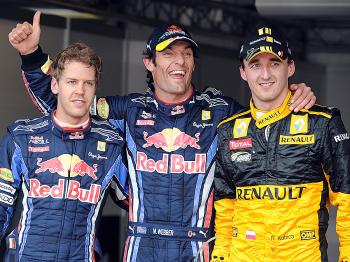 The Australian lapped the course in 1:13.826, the only driver to crack 1:13. As he did at Spain, Webber blew the field away, lapping three-tenths of a second faster than the second-place driver.

“To get pole at Monaco is a nice feeling obviously,” Webber told the post-qualifying press conference on SPEED-TV. “The heart rate’s up; you’ve got o t be very precise, and it’s a great challenge for the drivers. I ‘m very happy to be here..

Webber mentioned that having three Renault engines in the top the cars was great encouragement to the crews. The Renault engine is rumored to be down on power but at Monaco that makes less difference.

Monaco is a driver’s track. Because it is so tight, and slow relative to the other F1 venues, the edges that various chassis have in different situations are minimized. Crews make the suspension soft and the downforce high and let the drivers push as close to the walls as they can.

Webber brushed the guardrail quite hard on the lap just before his fastest lap. Having learned that limit, he went out and captured the pole.

Robert Kubica in the Renault spoiled Red Bull’s fourth front-row sweep, qualifying second with a time of 1:14.120. The Renault driver has been surprising quick all weekend and is poised to give Renault its first win of the season.

“We saved two sets of new options [softer tires] for Quali 3 so I had a first go with a bit more fuel and then a second one,” Kubica explained. “Unfortunately the final lap was not ideal. I pushed very hard on the first lap because here you never know if it will be the traffic or something. I tried very hard on the first lap then on the second lap I started very quick, did the fastest first sector but unfortunately for the second half of the lap the tires were already gone.”

Sebastian Vettel put his Red Bull in third, lapping the course in 1:14.227.

Vettel might have qualified higher but was balked while making his best run. H was in tenth with three minutes left, when he made a final flying lap and took third on tired tires.

“It was quite a surprise; even though there were only ten cars, I got a little bit of traffic so it wasn’t ideal to use the tires properly,” he told the press. “They came in nicely but when they were at their peak I couldn’t use it, and then I did it in the very end, but obviously it wasn’t enough.”

“All in all still a good result. Compliment to the team; also to Renault. There has been some criticism on the power side we know that probably it is not the strongest engine but for sure, around here it counts a lot to have drivability and I think if you have all the first three cars in Quali with the Renault engine that’s a positive note.

I’m looking forward to tomorrow. It is a long race; a lot of things can happen. It’s good to be in the front.”

Fernando Alonso crashed his Ferrari during the final practice session and was not able to qualify. He will start from the back of the grid.

Felipe Massa put the other Ferrari fourth on the grid, followed by Lewis Hamilton’s McLaren and the Mercedes of Nico Rosberg and Michael Schumacher.

Odds certainly favor Red Bull in the race. In the last 56 Formula One races at Monaco, the winner came from the top three grid positions 46 times.