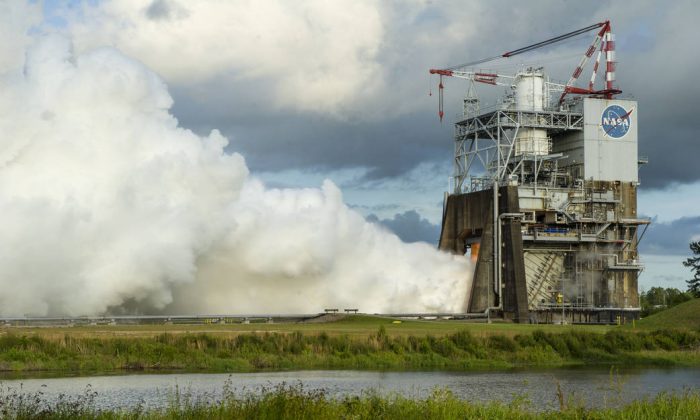 Last month, NASA tested the engine system of the Space Launch System (SLS), a launch vehicle with a payload of 77 tons, the largest rocket ever, period.

NASA’s engineers ran the SLS’ RS-25 engines for 7 1/2 minutes at the A-1 Test Stand in Stennis Space Center, Mississipi — the same historic testing location for the rockets in the Apollo Program, which sent the first human beings to the Moon — churning out vast amounts of steam from the water coolant.

The test was meant to try out a new computer controller, which monitors the largely automatic RS-25 engines. The SLS’s first launch is scheduled for 2017, and engineers hope that later modifications will enlarge its payload to 143 tons.

NASA said that it hopes the SLS will one day take humanity to Mars, a goal it shares with SpaceX’s CEO Elon Musk. At the moment, SpaceX focuses on medium size rockets optimized to deliver things to orbit, such as refueling the International Space Station, but Musk has made comments about wanting to build larger rockets, including a “super-heavy” Falcon rocket with a payload of 165 tons, which, if successful, could render the SLS superfluous.

SpaceX’s core innovation has been building rockets that match the existing technology available at a fraction of the cost, and it estimates that it could build a “super-heavy” Falcon at $2.5 billion dollars, or 1.25 years of funding for the SLS.