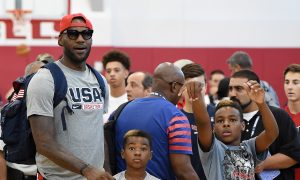 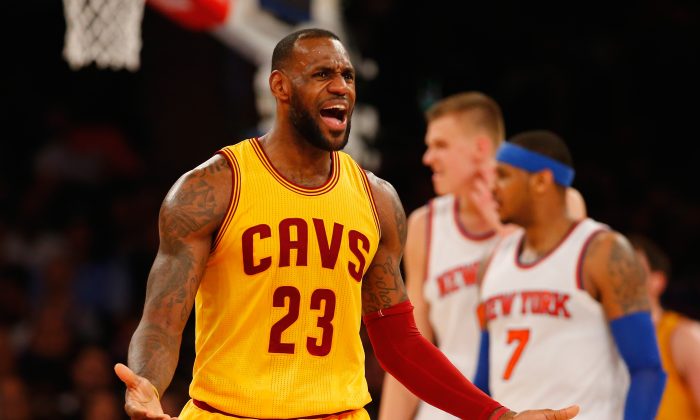 LeBron James has three triple-doubles on the season for the Cleveland Cavaliers. (Al Bello/Getty Images)
NBA

LeBron James may be on the wrong side of 30, likely won’t win an MVP for the third straight season, and is on a Cavs team that is still not favored to end its title drought, but the guy can still throw down a vicious dunk. Check out him posterizing Knicks forward Lou Amundson Saturday on the dunk and then getting a technical for taunting him afterwards.

LeBron James is feeling stronger as the season gets shorter.If you don’t believe him, ask Lou Amundson…

Here’s a closeup of his staredown on Amundson following the dunk.

The dunk was just one part of James’ 27-point, 11-rebound, 10-assist game—his third triple-double of the season—in Cleveland’s 107–93 win over New York at Madison Square Garden. The victory moved the Cavaliers to 52–21 on the season, while the Knicks fell to 30–44.

Cleveland, which has already clinched the Central Division title, is 2.5 games ahead of the Toronto Raptors for the top spot in the conference with nine games left.

LeBron James dunks all over Lou Amundson + stares into his soul, gets a technical. (WATCH):https://t.co/kygIKVE02T pic.twitter.com/BEYUdNUzgf

James, for his part, is having another stellar season—though not quite up to the MVP-standard he once set. The four-time MVP is averaging 25.0 points, 7.4 rebounds, and 6.6 assists per game but the advanced stats show that the 31-year old is starting to regress.

The 12-time All-Star has a 6.6 value-over-replacement (VORP) score according to basketball-reference.com, and a win share total of 12.1. The numbers are the lowest for James (in a season where he played 70 or more games) since his rookie season of 2003–04.

At his height, James—who last won MVP in 2013—had a VORP of 11.3 (2009) and a win share of 20.5 (also in 2009). This year, Stephen Curry of Golden State has all but locked up his second straight MVP award while breaking his own single-season three-point record and leading the Warriors to one of the best seasons of all time in the process.