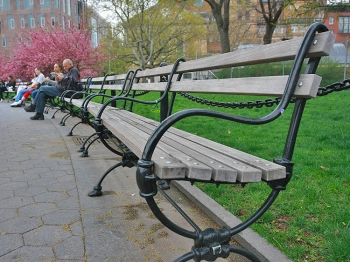 HOT SEAT: Pictured here on Monday, the benches in Washington Square Park are made of ipe, a tropical hardwood from the Amazon rainforest. New benches, also made from ipe, are set to be installed. (Tara MacIsaac/The Epoch Times)
US

By Tara MacIsaac
Print
NEW YORK—Since the 1960s, much of the wood used for the city's park benches, boardwalks, and piers has come from the Amazon rainforest. A tropical hardwood called ipe is particularly popular for its outdoor durability. To access the ipe trees scattered throughout the rainforest, however, foresters must raze large tracts of land.

“Logging of tropical forests to supply timber and pulpwood has contributed to deforestation at a rate of 0.2 percent a year. … This deforestation accounts for approximately 20 percent of the world’s annual man-made greenhouse gas emissions,” reports a 2008 memorandum from Rohit T. Aggarwala, the city's director of Long-Term Planning and Sustainability.

Aggarwala noted that New York City is home to the nation's largest park system and an extensive boardwalk network, making it a leading consumer of tropical hardwoods in the nation.

The city made a commitment in 2008 to phase out tropical hardwoods. Members of an organization called Rainforest Relief call on the city to uphold that commitment by halting the installation of 400 ipe benches in Washington Square Park. The group set up a 300-square-foot banner across the Washington Arch on Earth Day last week that read, “Mayor Bloomberg: Why was the Amazon logged for Wash. Square Park benches?”

In the city’s defense, Philip Abrahmson of the Department of Parks and Recreation wrote in an e-mail, “Due to the historic nature of the benches at Washington Square Park, we used sustainably harvested ipe.”

However, Tim Keating of Rainforest Relief argues that there is no such thing as “sustainably harvested ipe.”

“All ipe coming into the U.S. is coming from forest that is previously unlogged,” said Keating in a phone interview. He considers every acre of tropical old-growth forest to be endangered, and says the certifications that lead consumers to believe the wood they are getting is sustainable are misleading.

The Forest Stewardship Conservancy (FSC) issues certification for ipe wood that is recognized by environmental groups such as World Wildlife Foundation and Rainforest Alliance. However, Keating said his conversations with Rainforest Alliance have revealed that certification hinges on forestry being “well-managed” and stays away from a claim to sustainability.

He points out that certifications are more complicated than your average consumer may realize.

There are two types of FSC certification: one applies to the foresters harvesting the wood; the other is given to the supplier and is called Chain of Custody (COC) certification. A company can be COC certified as long as they sell some certified wood. It does not mean that all of the wood they sell is certified.

Although the city is using ipe wood for the benches in Washington Square Park, Abrahmson stated, “The vast majority of capital work being done by Parks across the city eliminates the use of tropical hardwoods entirely.”

Keating has worked for over a decade to raise awareness about ipe use in city works and was happy to elicit a response from the city. Unfortunately, he said this commitment does not apply to the many private entities that have stewardship over the city's parks.

“If none of this is even going through [the parks department], how are we going to track reduction?” he asked.

David Katz is vice president for marketing and events at Hudson River Park Trust. He says his organization may not be obliged to take the Department of Parks and Recreation's lead, but it has done so anyways.

“We've curtailed the use of any tropical hardwoods, and the new buildings don't have any,” reports Katz.

The alternative wood sources are becoming more readily available as demand grows. Development plans for Hunters Point, for example, use a wood called kebony. It is actually yellow pine from the south treated with a sugar compound to make it more durable and then called kebony. Right now most of the wood is sent to Norway for treatment, but facilities are being built closer to home.

Keating suggests a structural material made of recycled plastic and infused with fiberglass for durability. He says it has largely been rejected because it is often confused with a similar material composed of plastic and sawdust, which is not as durable.

The reinforced structural material has, however, already been used to build two tank bridges and one locomotive bridge and Keating says it's so durable “it will likely last forever.”