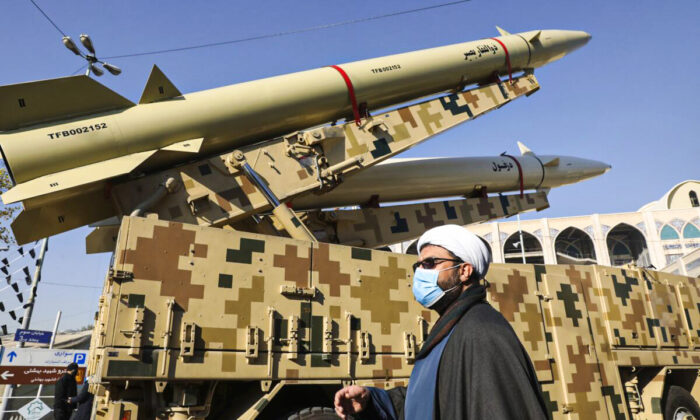 War in Ukraine and the Iran Nuclear Deal

Many—even House Speaker Nancy Pelosi (D-Calif.)—are suddenly complaining that the United States and most of Europe are still buying Russian oil amid the invasion in Ukraine—essentially financing Russian President Vladimir Putin’s war machine and prolonging the carnage while pretending to oppose him.

The conventional explanation of this murderous hypocrisy is that the aforesaid nations are so wedded to the cult of green energy that they wouldn’t dare produce their own oil and gas. This is particularly true of the United States, where President Joe Biden turned off virtually every spigot the minute he got into office and has continued to do so.

But this isn’t all about whether sometime in the 24th century we’ll finally find alternative energy sources to replace fossil fuels—I’ll wager they won’t be solar or wind.

Could it be that the United States and its putative partners in the renewed Joint Comprehensive Plan of Action (JCPOA) are buying Russian oil so that Russia will cooperate on the closing of the new Iran deal?

That deal, supposedly on the brink of being signed in Vienna, promises to be even worse than the original one, which Trump deemed—with considerable justification—to be the worst deal ever.

The details of that original deal were almost impossible to ascertain by the public because it had so many hidden codicils. It also had no enforcement provisions of any significance, so it basically wasn’t an actual deal. It was also never ratified by the Senate, and therefore Trump could legally rescind it by executive order—and he did.

(The Iranians are apparently looking for a way to avoid this eventuality in the new deal. They can read Biden’s poll numbers too.)

Melanie Phillips, on her substack, published an extraordinary litany of horrors in the new deal, but before I get into them, allow me to air something in macro that has always puzzled me.

Doesn’t Iran already have the bomb, at least in some form? After all, the atomic bomb was invented by us in 1944.

Since then, seven other countries have been acknowledged to have nuclear weapons. The Chinese got them in the 1960s while still basically amounting to a third-world country. Pakistan tested its first bomb in 1998.

Several other countries may actually have nuclear weapons without admitting it—they certainly have the technology.

My guess is Iran already has something. They’ve been working pretty hard. Israeli intelligence sneaked away one ton of Iranian nuclear materials, including compact disks, videos, and detailed designs in black binders, from Tehran, Iran, in 2018.

When shown to Trump in a private White House viewing by then-Israeli Prime Minister Benjamin Netanyahu, the information was said to have been instrumental in the president’s decision to withdraw from the first deal.

Why would anyone expect Iran to adhere to a second one?

They probably don’t. Deep down, they must know that most of this is for show. Everyone assumes that Iran will get the bomb sooner or later. This new deal reportedly only lasts for 2 1/2 more years.

The Israelis are naturally concerned, and their new prime minister, Naftali Bennett, has gone to Moscow to importune Putin.

Nevertheless, the speculation is that our people and the Europeans don’t believe the world would allow for the destruction of Israel, repeatedly called for by the mullahs (along with “Death to America,” of course).

Oh, really? In 2001, former (now deceased) Iranian President Akbar Hashemi Rafsanjani referred to Israel as a “one-bomb country,” meaning one bomb could wipe out the Jewish state, as opposed to larger countries, such as Iran, that could take several bombs and still survive.

He was correct, of course. The Israelis know it, and the Iranians obviously know it.

So back to Phillips’s discussion of the current deal. She quoted at length from Gabriel Noronha, who worked on Iran policy at the State Department under Trump. This is Noronha, taken from a series of tweets:

“1. My former career colleagues [State Department, National Security Council, and EU] are so concerned with the concessions being made by [Rob Malley] in Vienna that they’ve allowed me to publish some details of the coming deal in the hopes that Congress will act to stop the capitulation.

“2. ‘What’s happening in Vienna is a total disaster,’ one warned. The entire negotiations have been filtered and ‘essentially run’ by Russian diplomat Mikhail Ulyanov. The concessions and other misguided policies have led three members of the U.S. negotiating team to leave.

“3. This is a long and technical thread, but here’s what you should know: the deal being negotiated in Vienna is dangerous to our national security, it is illegal, it is illegitimate, and it in no way serves U.S. interests in either the short or long term.

There’s a lot more worth reading if you still have any hair left. It gets worse.

But first, nota bene, three members of the U.S. negotiating team have left. How often does that happen? And why do you suppose they did it? Unfortunately, it’s obvious.

“If this is correct, then under cover of the Ukraine crisis, an act of supreme treachery is being perpetrated by the Biden administration against America and the west in empowering the Iranian regime—an enemy of civilization that has been at war against America, Israel, and the west since it came to power in 1979,” Phillips said.

Why is this all happening? Do I have to quote H.L. Mencken again?

Yes, of course it’s that. Huge amounts of sanctioned money are being remanded to the Iranian regime, the greatest state sponsor of terrorism, by the same administration that took the Houthis off the terror list just days before they started rocketing Dubai, United Arab Emirates.

And, to inhale the pot, we’ll be buying oil from mullahs (along with the Russians) so we don’t sully our “magnificent ecological record.”

But it’s also about a dislike for Israel that started in the Obama administration and is still being carried forth by those who seem to obey the 44th president more than anyone.

Barack Obama didn’t just despise Netanyahu, as is well-known. He had a distaste for the Jewish state in general, which wasn’t only reflected in the statements of his pastor, Rev. Jeremiah Wright. It also appeared in his administration’s policies and, to an as-yet-unknown degree, in an event I wrote about in April 2010—“Why Is the LA Times Burying the Obama/Khalidi Tape?”

That’s a mystery yet to be solved. Meanwhile, we’ll soon have to deal with the new JCPOA. If there were ever anything for Congress to oppose, this is it.