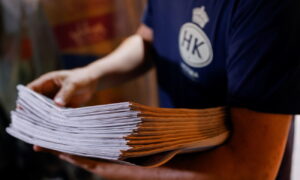 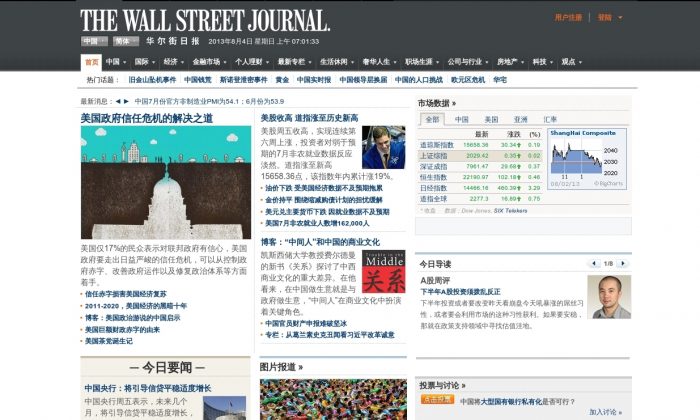 A screenshot of the Chinese edition of the Wall Street Journal. The website has been blocked in China, according to Greatfire.org. (Screenshot/Epoch Times)
China

Another major international website has hit the Great Chinese Firewall—this time it’s the Wall Street Journal’s Chinese language edition, and it’s a mystery as to why the site has been blocked.

China’s firewall monitor Greatfire.org’s routine check of the Journal’s accessibility in China discovered that their Chinese language edition, cn.wsj.com, has been entirely blocked since Aug. 2, though it may have been temporarily blocked on other occasions, when the check resulted in “contradictory” results.

The English-language version of Wall Street Journal remains unblocked by China’s firewall, which perhaps signals that the goal is not to entirely block the publication, but merely to restrict viewing.

It’s not obvious why Wall Street Journal was blocked. Most times, a foreign website is blocked as punishment for content critical or uncomplimentary to the Chinese Communist Party (CCP) or the People’s Republic of China, though unflattering content about high ranking officials of the Party, which controls media censorship in China, are also off limits.

The Journal has other credentials for hard hitting China coverage. Ian Johnson, now with The New York Times, won the Pulitzer Prize for his reporting on the persecution of the Falun Gong spiritual practice in 2001. But that was over a dozen years ago, and hardly cause to block the site today.

In June, censors shut down Chinese users’ social media accounts of Japanese newspaper Asahi Shimbun, which had a following of over a million users. Until the accounts were deleted, it was the most popular foreign media outlet in China.

Greatfire.org, the Chinese firewall monitor, is a non-profit organization which also monitors blocked keywords on China’s social media site Weibo. According to their website, they are the sole “real-time, up-to-date resource on what sites and searches are blocked in China”. Their goal is to bring transparency to online censorship in China.