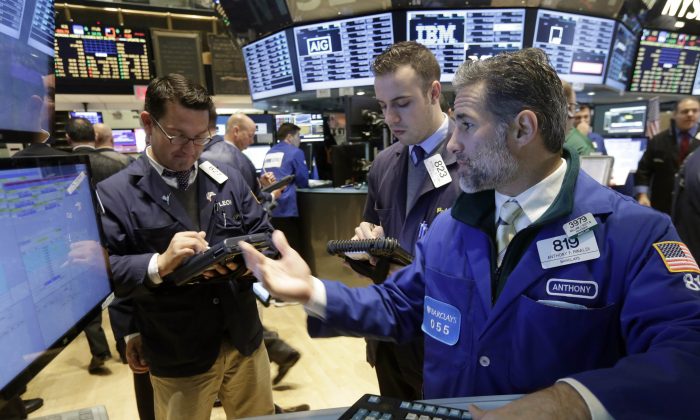 Wall Street Caps a Wild Month With a Rally

NEW YORK—For stock investors, there was no shortage of drama in October.

Stocks started the month modestly below a record high, only to cascade to their worst slump in two years. But after flirting with a correction, or a 10 percent drop, the U.S. market rebounded and closed at all-time highs on the last day of the month.

Both the Dow and the S&P 500 closed at record highs.

It’s a remarkable turn given the month’s volatility, which at times approached levels from the 2008 financial crisis. Then again, the month has an unfortunate history for unsettling moves, with the stock market crashes of 1929 and 1987 both happening in October.

This October, the market’s seesaw path was driven by fears that Europe’s economy was slipping back into a recession, worries about plunging oil prices and concerns of possible weakness in the U.S. economy. Oh, and don’t forget Ebola. Those anxieties sent the market, for the most part, straight down for two weeks.

The nadir came on Oct. 15, when the S&P 500 came with a hair’s breadth of going into a correction. Investors had suspected such a drop. The last one occurred in late 2011, and historically corrections happen every 18 months or so.

But just after the market came close to going into a correction, it bounced right back. Strong U.S. corporate earnings were the primary driver of the rebound as well as signs that central banks in Japan and Europe were going to do all they could to stop their economies from dragging everyone else down with them.

“I don’t think it’s a surprise that we came close to a correction. We’ve been expecting one for a while. I think the bigger surprise has been how we rip-roared all the way back up,” said Bob Doll, chief equity strategist at Nuveen Asset Management. “When you hit someone over their head with a hammer, you don’t expect them to get up immediately.”

U.S. companies have been, for the most part, reporting strong quarterly results the last two weeks. Corporate profits are up 7.3 percent from a year ago, according to FactSet, compared with the 4.5 percent investors had expected at the beginning of the month. And any worries about the U.S. economy earlier in the month evaporated as the data rolled in, mostly recently Thursday’s data showing the U.S. economy grew at a 3.5 percent pace last quarter.

Friday’s gains were driven by the Bank of Japan, which surprised investors by announcing it would increase its bond and asset purchases by 10 trillion yen to 20 trillion yen ($90.7 billion to $181.3 billion) to about 80 trillion yen ($725 billion) annually. The announcement came after data showed that the world’s third-largest economy remains in the doldrums, with household spending dropping and unemployment ticking up.

Japan’s move comes only two days after the U.S. Federal Reserve brought an end to its own bond-buying program. Investors have been hopeful that the European Central Bank might also start buying bonds to stimulate that region’s economy by keeping interest rates low and injecting cash into the financial system. That form of stimulus is called quantitative easing, also known among investors as “QE.”

“The Japanese central bank has taken the QE baton from the Fed, and equity traders couldn’t be happier,” said David Madden, market analyst at IG.

Japan’s stock market rose 4.8 percent to the highest level since 2007.

The Japanese currency weakened dramatically following the Bank of Japan’s announcement. The yen slumped 2.6 percent against the dollar to 112 yen. The yen is trading at the lowest level in more than five years. Japanese companies typically like a weak Japanese yen because it makes their exported goods cheaper abroad.

European stock markets rose broadly following the Bank of Japan’s announcement on hopes that the ECB could be tempted to follow Japan’s lead in stepping up stimulus measures. However, few think anything will be announced at the ECB’s next policy meeting next Thursday.

“The willingness of the Bank of Japan to ease further in the fight against deflation will encourage those who think the ECB should be doing the same,” said Julian Jessop, chief global economist at Capital Economics.

In other markets, the price of U.S. benchmark crude oil fell 58 cents to $80.54 a barrel in New York as increasing production from OPEC members added to already high global supplies of oil.