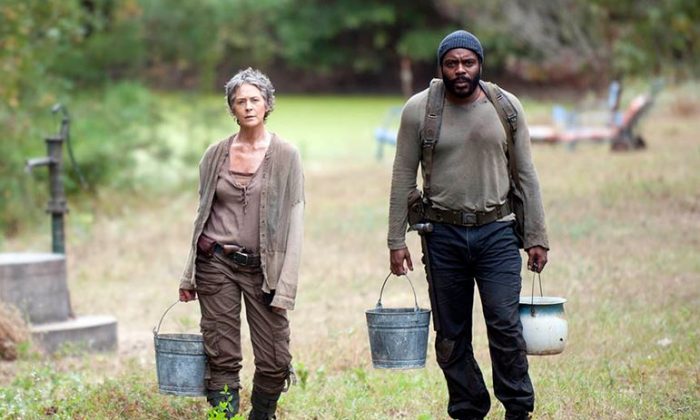 The Walking Dead season 5 trailer is out, but one part that isn't clear is how Carol, Tyreese, and baby Judith reunite with Rick and the larger group. Carol Peletier (Melissa McBride) and Tyreese (Chad L. Coleman) in Season 4, Episode 14. How will they reunite with the group in season 5? (Gene Page/AMC)
US

The Walking Dead Season 5 is still filming, but two deleted scenes from the fourth season have been uploaded.

“The first of the two scenes is from the season’s fourteenth episode, titled ‘The Grove.’ It features Tyreese, Carol and the two girls they were traveling with…and it not only teases Tyreese’s comic book past (he references a football stadium, and in the comics was a football player before the zombie apocalypse) but also explains a question that bothered a lot of fans: Why did Carol and Tyreese suddenly start carrying the baby around in a backpack with no explanation?” the site says.

WetPaint.com reported that new stunt coordinator, Monty Simons, elaborated on what fans can expect in the next season.

“I jumped in feet first on the premiere. It’s probably one of the biggest stunt-heavy episodes ever filmed,” he said. “I didn’t have a whole lot of time to sit around and think about how to properly get into gear. We had to hit this gear immediately.”

He also said that Rick actor Andrew Lincoln was the hardest person to convince to have a stunt double.

“To an extent, we want them to do their own stunts and the audience wants to see their favorite character’s face in the middle of a big, dangerous action scene, but it’s my responsibility to not let them get hurt and have our whole show shut down,” he said. “So, there comes a point where I look each actor in the eye and say, ‘Nope. You’re done in this scene,’ and then I bring in the ugly stunt double to take the beating.”