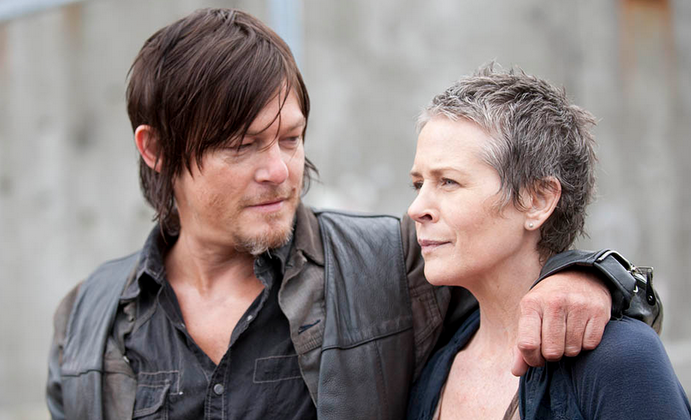 The latest Walking Dead season 5 spoilers are very intriguing, especially pieced together with some speculation following the first footage from the season shown during the recent Talking Dead special.

The footage showed Carol and Tyreese hiding from a horde of walkers moving toward them.

As seen from the teasers for the season 4 finale, among others, The Walking Dead producers enjoy including shots and moments in the footage that are hard to decipher until the full episodes are aired.

Some speculation about the footage is that Carol and Tyreese find out that Rick and the group are trapped at Terminus, and lead a horde of zombies into Terminus. During the ensuing mayhem, at least some of them escape.

Connecting with that type of theory, recent photos leaked from the set appear to indicate that Carol and Daryl are together in a van. Either way, this is after Daryl has somehow gotten out of Terminus, whether he saw Carol there or met up with her outside somewhere.

But the photos show the van hanging off a bridge, seemingly close to falling to the ground below. Do one or both of these beloved original characters die at this point?

Some fans are speculating on the Spoiling Dead Fans page, which obtained the photos, that the situation will be part of the midseason finale.

A fan on set said that both Norman Reedus (Daryl) and Melissa McBride (Carol) were on location, and there were also dummies of each of them inside the van. “The two dummies that were brought in were dressed as Daryl and Carol. It’s likely they will be used in some way during the filming of the van stunt,” the page noted.

On Monday, another fan said that Andrew Lincoln (Rick Grimes) is on location.

And on Tuesday, a fan shared a photo and said that it looks like the van gets swarmed by walkers.

And the van also has a white cross, similar to the van that reportedly hit Carol previously in filming, and similar to the one on the car that took Beth away in season 4. Will this situation shed light on what happened to Beth if she hasn’t appeared in the season at this point?