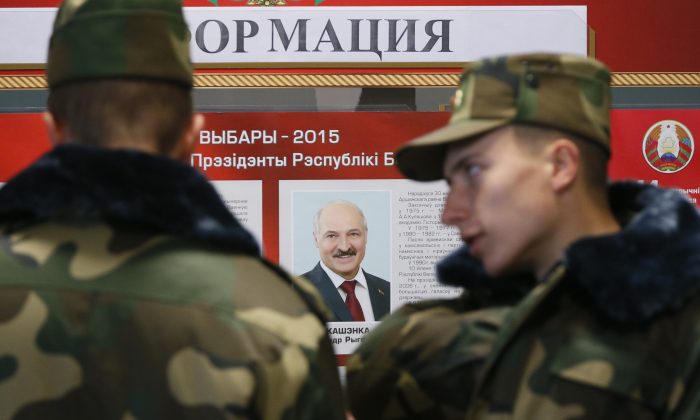 Voters in Belarus Set to Give President Lukashenko 5th Term

MINSK, Belarus— A presidential election was under way Sunday in Belarus, where authoritarian leader Alexander Lukashenko faced no serious competition and was expected easily to win a fifth term. The opposition called for a boycott of the vote.

Even before polls opened in the former Soviet republic, however, the Central Election Commission announced that 36 percent of the 7 million registered voters had cast their ballots during five days of early voting.

Opposition leaders denounced the early voting as an ideal instrument for falsifying the result.

Lukashenko faced three nominal rivals in the election: the leaders of two pro-government parties, Sergei Gaidukevich and Nikolai Ulakhovich, and little known opposition activist Tatyana Korotkevich. Prominent opposition figures either were barred from running or decided against trying to get on the ballot for an election they considered a farce.

During his 21 years of rule, Lukashenko has cracked down on dissent while cultivating an image of a strong leader capable of guaranteeing order and stability.

“Oh, life has become harder, but Lukashenko promises stability and peace,” said 68-year-old Tamara Krylovich after voting in Minsk, the Belarusian capital. “Look at what democracy brought in Ukraine — war and poverty.”

Russia’s Ukraine Invasion May Push Belarus to Embrace the West

Lukashenko has largely preserved the state-controlled Soviet type of economy, albeit with the help of cheap Russian gas and Western loans. The unreformed economy may be sputtering, but it still puts bread on the tables of pensioners and workers at unprofitable state factories.

But Anton Gurevich, a 41-year-old automobile factory worker, said it was time for a change.

“I have lived half of my life with Lukashenko, but life has not gotten better,” he said. “After all, the leadership should change, there should be changes.”

An independent institute of socio-economic and political research put Lukashenko’s support at about 46 percent in September, while the official state sociology institute tallied his support at 76 percent.