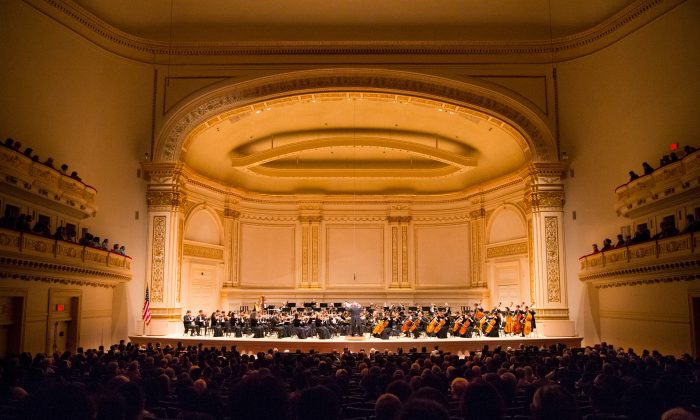 NEW YORK—Artist couple Mariah Corrigan and John Herner attended a performance at the request of their son not knowing what to expect—an orchestra combining traditional Chinese and classical Western music—and were not disappointed.

Her son Elias had very much wanted to go, she explained, so she and her husband John Herder bought tickets for the Shen Yun Symphony Orchestra performance at Carnegie Hall for Oct. 10. So the family, all native New Yorkers, went on an outing to Midtown and found themselves experiencing the cultures of both East and West.

“I loved it, it was very beautiful, and I really liked the—well, everything really,” Elias said.

“The fusion of East and West, and the mixture of all the different instruments—I thought they really were composed to really work together well. It could have gone on,” Ms. Corrigan said.

The family had given a standing ovation and kept at it, hoping for more than one encore. “We really, really enjoyed it,” she said. They got a second encore.

For Mr. Herder, a visual artist who has shown all over New York, the music was a nice surprise.

The program included original compositions, conducted by Milen Nachev and William Kuo, that included Chinese instruments, used Western instruments to mimic ancient Chinese ones, and had tunes and tones that were distinctly Chinese. The orchestra also includes classical Western pieces in its program, such as Sarasate’s “Gypsy Airs.”

The orchestra is part of Shen Yun Performing Arts, which was established in 2006, in New York.

The globally touring dance and music company states that its mission is to revive 5,000 years of Chinese civilization, which was all but destroyed under 60-some years of communist rule. Thus, art forms like classical Chinese dance, music, and the bel canto style of singing are hard to come by in their authentic forms today.

Understandably, it was new for Mr. Herder.

“There’s a lot of unpredictability about it,” Mr. Herder said. “A lot of times my attention was drawn to something and—surprise. It’s nice to be surprised.”

“It’s a nice aesthetic experience where not all of it is predictable and conforms to your expectations. It was beautiful, and I enjoyed it very much,” Mr. Herder said.

The Shen Yun Symphony Orchestra continues its tour with a performance on Oct. 11 at the John F. Kennedy Center for the Performing Arts inWashington, D.C. and on Oct. 13 at the Van Wezel Performing Arts Hall in Sarasota, Florida. For information about the orchestra’s October performances, visit ShenYun.com/Symphony.