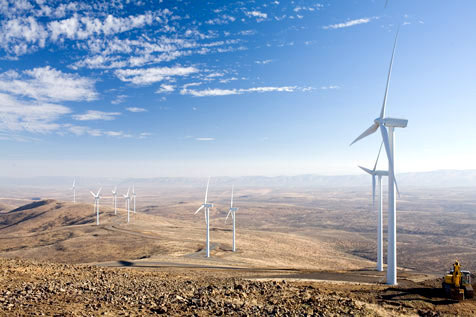 The Wild Horse Wind and Solar Facility, located in Central Washington, is Puget Sound Energy's second wind-powered electric generation facility. It the utility's largest wind farm with 149 turbines with the ability to generate up to 273 megawatts (MW) of electricity. (Puget Sound Energy)
US

Visitors Experience an Up-Close View of a Wind Farm

By lisa.wederspahn and Paul Darin
Print

When conservation and energy meet head-on, it produces a rare site for recreation enthusiasts. The Wild Horse Wind and Solar Facility and Renewable Energy Center offers Puget Sound-area citizens something that most Americans may never get to experience: an up-close view of 350-foot-tall wind turbines while enjoying biking, hiking, or just about anything the land has to offer.

“The wind farm opened in 2006, and the visitor center in 2008,” said Andrea Nesbitt, Visitor’s Center and Environmental Education coordinator for the wind farm. “It’s one of the only visitor’s centers on a wind farm in the U.S.”

The facility was developed by Puget Sound Energy (PSE) and consists of approximately 11,000 acres of land. It is open to the public via a permit, which is available to everyone regardless of the activity. The site has 149 turbines, and in addition to hiking, biking, bird watching, horseback riding, and hunting, a visitor to this stretch of recreational land can take a tour of a turbine and learn more about wind energy.

Open from April to November, the facility gets about 20,000 visitors a year. The surrounding area includes biking and hiking trails, but most of the land is reserved for hunting. In fact, the facility periodically hosts a hunter’s breakfast event to promote public use of the land.

About 16 miles northeast of Ellensburg in central Washington state, the wind farm runs along Interstate 90. Sitting at an elevation of about 2,600 feet, a visitor can enjoy a view of Mount Adams or Mount Rainier in the background. In addition, the landscape is home to over 200 different species of plant life.

The Lower Snake River Facility–Phase I was recently completed in early 2012 and was built following the success of the Wild Horse Wind and Solar Facility and PSE’s Hopkins Ridge Wind Facility.

Located in Garfield County, near Pomeroy in southeast Washington, Phase I represents the largest of PSE wind farms. Lower Snake River Facility–Phase I consists of 149 turbines generating 343 megawatts of electricity, enough to power 100,000 homes. Individually, each turbine can power about 700 homes.

According to PSE, their permits allow for the development of up to 795 turbines, which could be constructed in future phases of the Lower Snake River Project. If the project completes all of its phases and is fully developed, the facility could generate about 1,400 megawatts of electricity, making it one of the most powerful wind farms in the United States.

Unlike the Wild Horse Facility, nearly all of the land surrounding the Lower Snake River Project will be reserved for agriculture and farming.

Combined, PSE’s three facilities produce enough electricity to power 200,000 homes. PSE is the largest wind energy utility provider in the Northwest, and it is the second-largest producer in the United States.