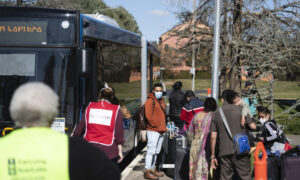 Wife Bhramaramba plays the hazardous receiving end as she allows her husband to smash tiles and slice coconuts across her head and body.

She says, “I just want to break the rules and follow my husband. I also thought that I would get quick recognition by performing such stunts.”

Husband Balashankar says, “I practice my stunts on my wife and children, because I am confident nothing will happen to them. There lies risk, but trust too.”

When not performing, Bhramaramba is a mother to her two sons.

Son Tulasi Ram says, “I am proud of my parents because of the stunts they perform, and that no one else in Chirala Mandal can. My friends often ask me how my father and mother do all this. They are surprised about it.”

The couple hope to raise sponsorships so that they can take their show abroad to perform bigger and riskier stunts.

“My dream is to perform abroad before eminent persons and gain good name and fame,” says Bhramaramba.