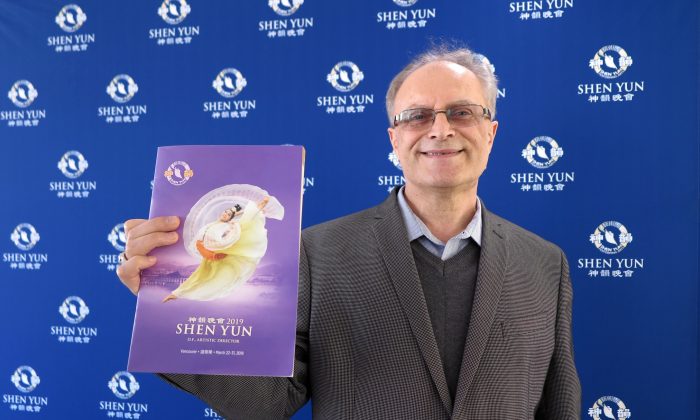 VANCOUVER, Canada—Ukrainian violinist Yuri Zaidenberg felt the colors and sounds and sheer energy of the artists wash over him as he sat in audience of Shen Yun Performing Arts, and he was filled with excitement.

“I was so excited after the performance, a very expressive and colorful [event] with colors and [such] effect. For me, it was something special,” Zaidenberg said at the Queen Elizabeth Theatre, on March 30.

Zaidenberg has performed all over the world as a concert soloist, in chamber ensembles, and as concertmaster in various orchestras, and has also maintained a busy teaching career over the decades, not just of violin practice, but of music psychology and pedagogy.

Thus the intricacies and methodology of New York-based Shen Yun’s unique orchestration were not lost on Zaidenberg, who said of course he had to pay attention to the orchestra, and whole-heartedly enjoyed the musical experience.

“It’s special,” Zaidenberg said. “They have a very good ensemble,” and excellent conductor, he added.

Zaidenberg said there was not a beat, not a note out of place, and the music transported him to China.

Shen Yun’s mission is to revive 5,000 years of China’s divinely inspired civilization through the arts, and Zaidenberg felt they succeeded. He pointed out many aspects of the production he felt were unique.

“I was impressed very much their energy which is coming from the stage, with a lot of colorful things in connection with [the backdrop], it’s like they coming from [a] movie to the stage,” Zaidenberg said.

Shen Yun’s backdrop is digitally animated, allowing performers to seemingly step from stage to screen, from heaven to earth and back. It was unlike anything Zaidenberg said he had ever seen before.

“This is kind of extending this stage much higher to the skies,” he said. One moment a dancer would be floating across the stage, and a few steps later he would see them leap into the sky. “This is really great.”

Zaidenberg also pointed out that the production required tremendous coordination between many people, with 20 pieces of original music, scores of costumes that changed with every dance and story, the settings drawn for every dance, and so on. He marveled at the choreography of the nearly-20 dance vignettes, and the artistry of every aspect of the production.

“This changing from one stage to another stage gives a sense of a kaleidoscope, nonstop, your attention just pulling one to another,” he said.

Zaidenberg said it brought a smile to his face, to witness the level of art brought forth by 5,000 years of civilization in China

“It brings lots of energy to the audience,” Zaidenberg said. “It’s something new, it’s changing … I was wowed. They, together [are] a great ensemble.”