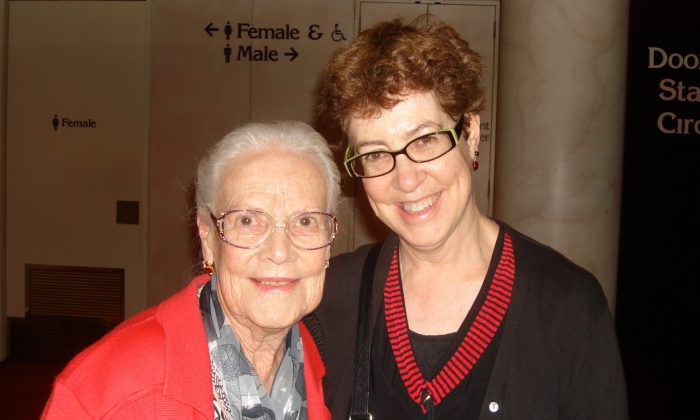 “It was beautiful,” Ms. Hewison said from the Arts Centre’s State Theatre, March 27.

Shen Yun is based in upstate New York and according to their website “The Shen Yun Orchestra combines the spirit, beauty, and distinctiveness of Chinese music with the precision, power, and grandeur of the Western symphony orchestra. The result—two great traditions producing one refreshing sound.”

As an accomplished violin player Ms. Hewison enjoyed listening to the instruments in the unique orchestra.
“I thought it was very interesting to see where they combine Western instruments and Chinese instruments—that was very effective.”

“Sophisticated dance techniques, an orchestra joining instruments from both the East and West, beautiful costumes, and a stunning back drop—this is Shen Yun at first glance. But digging deeper, one discovers a sea of traditional Chinese culture,” states the Shen Yun website.

“Mortals and divine beings merge on stage as one. Principles such as benevolence and justice, propriety and wisdom, respect for the heavens, and divine retribution, all come to life, washing over the audience. Originating from Confucianism, Buddhism, and Taoism, these ideals are the essence of traditional Chinese culture.”

Ms. Hewison is known in Melbourne circles for her violin playing and teaching, performing regularly on the baroque violin and viola. She has studied in London and performed in the UK, Spain, Greece, France and the Netherlands as well as many baroque performances throughout Australia. She has featured on a number of CDs and has recorded for the ABC.

Ms. Hewison also teaches violin and viola and is head of strings at Ivanhoe Girls’ Grammar School, amongst a list of credentials.

Mrs. Hewison was at a Probus Club meeting when she was introduced to Shen Yun by a guest speaker.

“I thought I’ve just got to see it,” Mrs. Hewison said.

“So I think there was a lot of publicity in Melbourne—book clubs and everything. It was really lovely, fantastic,” Ms. Hewison said.

“Artistically it was good to see, but it was great to see the traditional [stories], the river one I really liked. The farmer was so happy and the flowing ribbons. We really enjoyed it.”