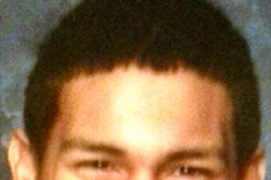 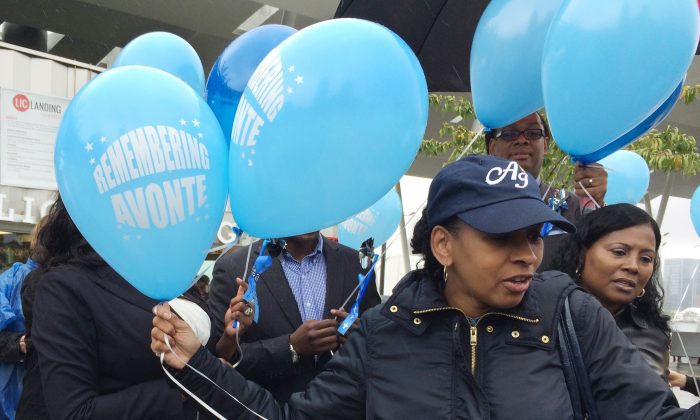 Vanessa Fontaine releases balloons in memory of her late son, Avonte Oquendo, at an event in New York marking the one year anniversary of Avonte’s disappearance, Saturday, Oct. 4, 2014. The 14-year-old autistic boy wandered out of his school on Oct. 4, 2013 and was later found dead in an apparent accidental drowning. (AP Photo/Colleen Long)
New York

NEW YORK—The mother of a nonverbal autistic teen who died after he wandered from his school a year ago Saturday wept as she thanked the volunteers who helped search for him and called for reform within a broken education system that she said allowed her son to slip away.

“It’s hard for me,” Vanessa Fontaine said, her voice cracking. “We all miss him so much. There’s not a day that goes by that I don’t wish he was here. And because of the neglect by these employees from the school, I don’t have my son.”

Fourteen-year-old Avonte Oquendo vanished from his school Oct. 4, 2013, through an open door that should have been locked. A school safety officer who saw the boy told him to return to his classroom, but he didn’t follow Avonte there.

The disappearance touched off a citywide search that included hundreds of volunteers, police officers, and marine units. Missing-person posters were plastered on lampposts and placed on car windshields. Announcements were made for weeks on city subways, imploring people to contact the police if they had information. Avonte was fascinated with trains.

His remains were discovered along the East River in mid-January. His cause of death couldn’t be determined, the medical examiner’s office said.

An investigative report released in March found a series of errors led to his disappearance, including the failure by a teacher to pass on a warning that Avonte might wander. But the report by the special commissioner of investigation for city schools didn’t recommend any disciplinary action and instead referred the findings to city and state education officials and to the Queens district attorney’s office, which said it was reviewing the matter.

Fontaine said it was unacceptable that no one had faced discipline and called for those involved to lose their jobs.

“I just want everybody to know that he may be a special-needs kid, but he’s my baby,” she said through tears. “And I entrusted him to the school system, and I sent him to school, and he never came home.”

Fontaine, along with family, friends, and volunteers, released blue balloons and read poetry on a rainy afternoon at the Cliffside Park, where Avonte was headed when he was last seen.

Bonnie Kiladitis and her family participated to show their support. Her 10-year-old son, Bradyn, has autism and attends the same school.

“If you have a child, it’s your worst fear,” she said. “Everyone must be as safe as possible. This can never, never happen again.”

Waundell Saavedra, an opera singer from the Bronx, said he saw reports about Avonte on the news last year and felt compelled to help search for him.

“It was really something in my heart. I could not watch those stories and not do something,” he said. “I’m just so saddened by the outcome.”