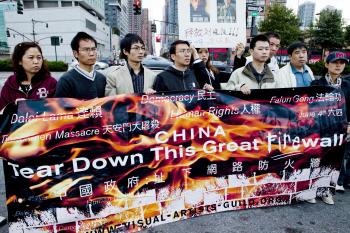 On the anniversary of Chinese Communist Party (CCP) taking control of China, members from various groups promoting change in China held a candlelight vigil in front of the Chinese Consulate in west Manhattan on Tuesday night. (Henry Lam/The Epoch Times)
US

NEW YORK—On the 61st anniversary of Chinese Communist Party (CCP) taking control of China, many groups united in front of the Chinese Consulate in west Midtown to mourn the many lives and freedoms that have been lost during the regime’s rule.

From the early days of killing business and landowners as “class enemies,” to the Cultural Revolution, which extinguished a cultural and intellectual flame in the nation, to the many prisoners of conscience in recent years who have been tortured and killed, the lives lost were remembered on Tuesday with candlelight at the annual vigil.

The Visual Arts Guild, an organization that has been especially vocal about the suppression of freedom of expression in China, brought together youth from several groups including, The Chinese Alliance for Democracy, the Asian-Pacific Human Rights Foundation, and the Chinese Coalition for Citizens’ Rights.

Two Chinese expatriates who have never relented in the struggle against the Chinese communist regime, spoke to the young crowd they hoped would carry forth their work into the future.

“I shared my feelings with them, (to tell them) not to give up, (to) just continue” said Baiqiao Tang, who was a student leader in the pro-democracy uprising in Tiananmen Square in 1989 and chairman of the China Peace and Democracy Federation. “Most of them are new in the Democracy Group. So I hope that they can continue for 20 years like me. I hope that they can overcome the difficulty a little faster than me. Because I took a long time to fix these problems. Sometimes I felt lonely; some times I wanted to give up,” added Tang.

Tang finished his autobiography last month. Today he received a few phone calls from some famous and influential people who would like to write commentaries for his book, showing he is no longer alone and giving him great encouragement. Among the callers were the former Mayor Ed Koch, renowned Columbia University professor and father of Uma Thurman, Dr. Robert Thurman, and the Dalai Lama, who will be writing the introduction to his autobiography.

Tang stressed the need for the many persecuted groups, whether Falun Gong practitioners, journalists, Tibetans, or Christians, to stick together.

Jonathan Cao was also a student leader in the Tiananmen Square uprising, which turned into a massacre. Like Tang, he had a message for the young Chinese, on whom the future of his homeland depends.

“When you talk to someone from China who is under 30 years old, they practically know nothing about what happened in 1989. Let them know what happened and tell them, ‘You have to remember. If you forget about it, the same thing will happen in the future,'” said Cao.

Cao was formerly a member of the Chinese Democratic Party, but left the Party with a few other members to form the Chinese Coalition for Citizens Rights. He believes that fighting for human rights will elicit a more fundamental change than politics ever can.

“If everyone’s rights are protected, then I think to anyone, it’s more important than a political system,” he added.