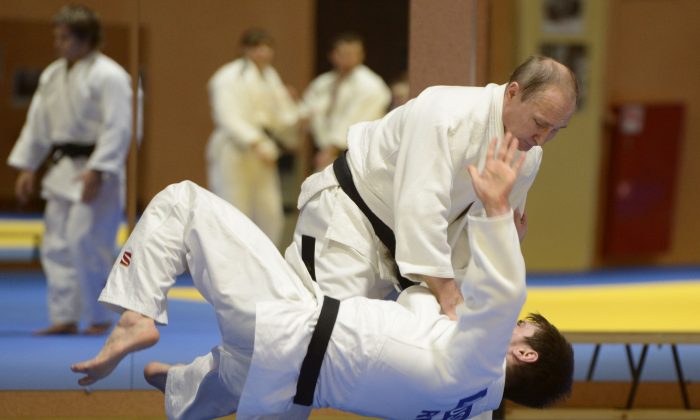 Russian President Vladimir Putin, top, competes against Musa Mogushkov, member of Russia Judo team during their training session in the resort city of Sochi, Russia, Friday, Jan. 8, 2016. After Russian President Vladimir Putin and national judo team coach Ezio Gamba took each other to the mat in a practice, Putin followed up with a smooth move, granting the Italian a Russian passport. (Alexei Nikolsky, Sputnik, Kremlin Pool Photo via AP)
Europe

Vladimir Putin sparred with members of the Russian judo national team, which was captured on video.

The Russian president showed off his skills in the city of Sochi over the weekend, RT reported.

He grappled with the national team and its head coach Ezio Gamba, who won an Olympic gold medal at the Moscow Olympics in 1980.

When he was 12 years old, Putin took up judo and sambo, a type of Russian martial arts. He won competitions in his hometown, holding a 5th degree black belt, and he earned the Russian title of Master of Sports in judo in 1975. He also holds an 8th dan black belt in Kyokushin kaikan karate, which he obtained in 2014.

Putin is also said to be a friend of actor and martial artist Steven Seagal, who have appeared in public together numerous times.

“Yes, we talked,” Emelianenko, also a noted Russian judo practitioner, told Rsport.ru in November, per Vice. “He said he would be very worried (with a smile). And he wished me luck.” Putin’s worries weren’t necessary, as Emelianenko demolished his opponent Jaideep Singh in his Rizin Fighting debut on Dec. 31.