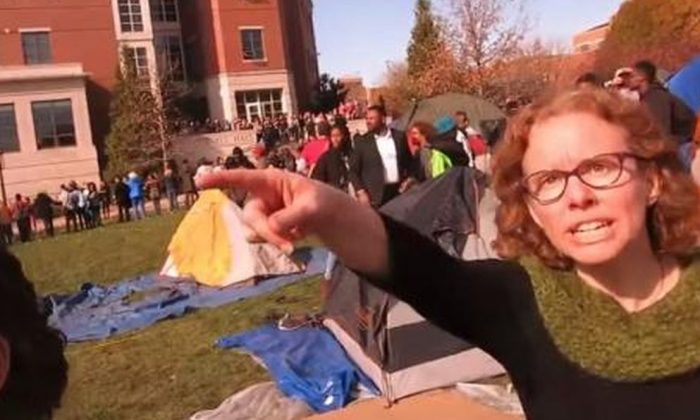 Video footage shows protesters and a mass media professor at the University of Missouri attempting to block media coverage of the event, sparking a debate over the right to access a school’s public space.

University of Missouri faculty and activists with Concerned Student 1950 were captured on video surrounding journalists and blocking media coverage the protest at the university’s quad. Protesters have been living in a makeshift tent city since last weke.

“Help me get this reporter out of here,” said Melissa Click, a Mass Communications assistant professor, when journalist Mark Schierbecker started recording the demonstrators. Click added “I need some muscle.”

Footage also shows Janna Basler, the school’s Greek Life assistant director, walking into Tai, demanding that he “back off.” She said, “These are people, too. Leave these students alone.”

Students at the university have garnered national attention in recent weeks for protesting against racism on campus. The school’s football team boycotted practicing or playing until school President Tim Wolfe resigned, and he did just that on Monday.

The school campus debate about press freedom is a new wrinkle in the protest. Tai, who also was freelancing for ESPN, was blocked when the students were chanting, “Hey hey, ho ho, reporters have got to go.” Tai answered, “I have a job to do” and they responded, “We don’t care about your job.”

On Twitter and elsewhere, Tai was hailed by other journalists.

Tai explained that he was just trying to get photos.

“I don’t have any ill will toward the people in the video,” Tai told the Los Angeles Times, referring to demonstrators at the University of Missouri. “I think they had good intentions though I’m not sure why it resorted to shoving.”