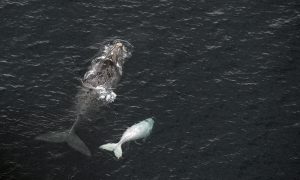 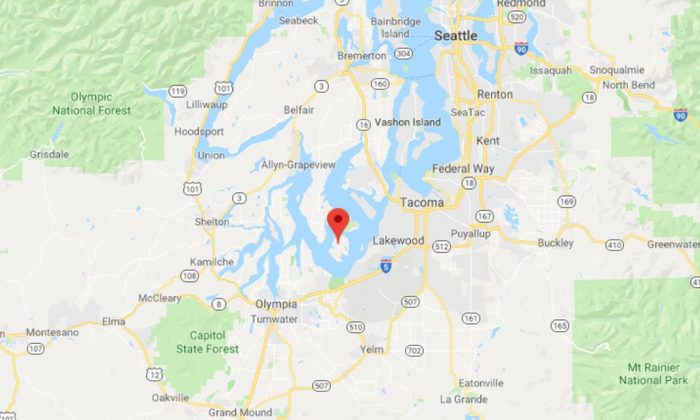 A group of boaters got frightened when young orcas came to check out their rowboat.

Steven Sloan says they were boating in the Puget Sound in Washington State.

A video can be seen below (Warning: bad language):

“My buddies and I were crabbing off of the west coast of Anderson Island and even though we didn’t really catch anything, we got to see the pod of orcas everyone has been talking about! We were in a little aluminum rowboat and we think that the sound of the rope being pulled along the side of the boat is what attracted the babies because right after we pulled up the pot the pod headed right for us,” he wrote.

“Most of the fun from this video comes from how scared we (really just me) were so some profanity is used … However feel free to laugh at how I respond to a scary situation like this (I yell run even though we are in a rowboat) and enjoy the beautiful orcas at the beautiful Anderson Island! Others in the boat are Michael Niccum and Eugene Dight,” he wrote.

As some noted, orcas, or killer whales, don’t attack people in the wild.

Over the years, scientists have identified dams, pollution, and vessel noise as causes of the troubling decline of the Pacific Northwest’s resident killer whales. Now, they may have found a new and more surprising culprit: pink salmon.

Four salmon researchers were perusing data several months ago on the website of the Center for Whale Research, which studies the orcas when they noticed a startling trend: that for the past two decades, significantly more of the whales have died in even-numbered years than in odd years.

n a newly published paper, they speculate that the pattern is related to pink salmon that return to the Salish Sea between Washington state and Canada in enormous numbers every other year—though they’re not sure how.

They suspect that the huge runs of pink salmon, which have boomed under conservation efforts and changes in ocean conditions in the past two decades, might interfere with the whales’ ability to hunt their preferred prey, Chinook salmon.

Given the dire plight of the orcas, which officials said are on the brink of extinction, the researchers decided to publicize their discovery without waiting to investigate its causes.

“The main point was getting out to the public word about this biennial pattern so people can start thinking about this important, completely unexpected factor in the decline of these whales,” said one of the authors, Greg Ruggerone. “It’s important to better understand what’s occurring here because that could help facilitate recovery actions.”