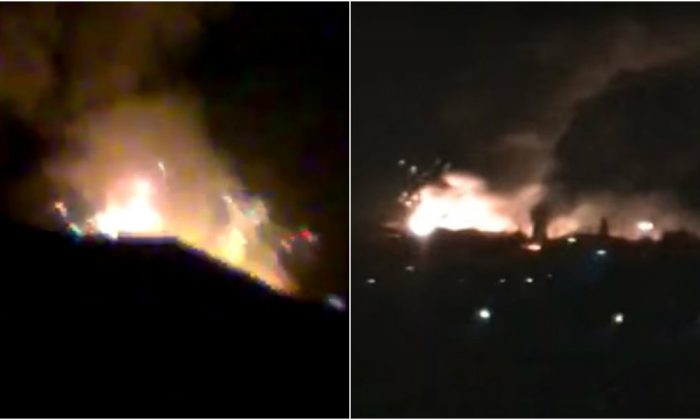 Several huge blasts were reported in Ukraine’s Lugansk, sometimes spelled as Luhansk, region on Thursday night, according to media reports. At least one person was killed.

Video footage of one of the explosions was recorded and uploaded to YouTube.

More than 3,500 tons of munitions are located at the ammo depot, controlled by the Ukrainian government, reported Russian state-run news outlet, Sputnik News.

“The depot stores over 3,500 tonnes of munitions. Explosions seriously complicate the efforts to put out the blaze,” Yuriy Klymenko, the deputy head of the Lugansk Regional Military-Civil Administration, told the media outlet.

He added that shell fragments are exploding near the right of the town, and a shop building was hit.

“Unfortunately, there is information that one of the shop employees has been killed,” he was quoted by state-run RT.com as saying.

A local woman told RT.com that homes were damaged in the blasts.

“It is very scary!” the woman, who lives in Svatovo, Tatyana Verbitskaya, told RT.

“I am inside the house, and my home has very thick walls, but the blast wave still hurts my ears,” she said. The woman added that she was fearful for the lives of people living closer to the warehouse.

“Roofs are blown off and windows shattered there,” the woman said.

The Ukrainian Security Service apparently opened a criminal investigation into the blasts, suggesting the blasts were the result of “an act of terrorism.”

Heorhiy Tuka, the governor of Lugansk, added that the ammo depot may have been hit by flare gun rounds.

“According to the preliminary information, two flare gun rounds were launched, the servicemen have put out the first round but while they were extinguishing the fire, the second [round was launched],” he told 112 Ukraina television channel.