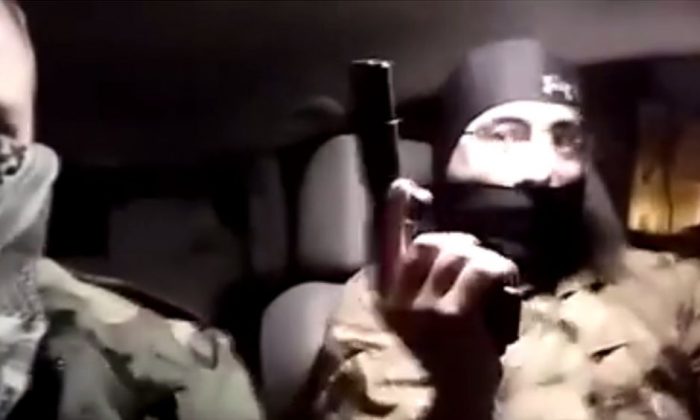 According to the New York Observer, BlackPowerRanger might be Lance Scarsella, 23. He was arrested and charged with assault in connection with the protest shooting. Some activists on Twitter said that SaigaMarine is a 32-year-old Hispanic man who was arrested on Tuesday and released later on. Two other suspects are also in custody related to the shooting. Police said SaigaMarine wasn’t at the protests when the shooting occurred.

Meanwhile, The Daily Dot has more on the suspects involved in the Black Lives Matter shooting.

It’s not exactly clear when the video was captured, but it was posted on the account several days before the shooting.

On Tuesday, Minneapolis police arrested a white man and a Hispanic man in connection with the shooting, the Star Tribune reported.

It’s still unclear any of the men shown in the videos were in any way connected to the shooting, as police have not released any names.

Oleuchi Omeoga, a protester who saw the shooting, told AP that the suspects were three masked men. She said the men “weren’t supposed to be” at the protest encampment.

Other witnesses told the Star Tribune that as protesters tried to herd the group away from the area, they opened fire on several protesters, hitting five of them.

For the uninitiated, 4chan is an anonymous imageboard that is dedicated to a wide variety of interests, from music and anime to politics and pornography. Perhaps the two most notorious boards on the website are random board /b/, which gets the most traffic and produces a wide array of bizarre memes, and /pol/, the board dedicated to politics, which interprets news events via a far-right, pro-white lens.

The video appeared on the Black Lives Matter Minneapolis Facebook page, which wrote: “Last night 2 white supremacists, one carrying a pistol, showed up to our peaceful protest at the 4th precinct.”

Apparently, a user on the /k/ board, who has the unique ID (“tripcode”) SaigaMarine, was shown speaking in the footage on the Black Lives Matter Minneapolis Facebook page. The man speaking the video says, “This is SaigaMarine, this is BlackPowderRanger… we’re gonna see what these [expletive] dindus are up to.” “Dindu,” as in “dindu nuffin,” is a racist term for black people used by some 4chan members. Users on the /k/ board Tuesday were making frequent threads and references to SaigaMarine.

“We are locked and loaded,” the person identifying himself as SaigaMarine says. The other said, “You have a gun?!?” They also said they’re giving an “update on /pol/” and made a number of references to memes used on the board.

Someone with the Black Lives Matter Minneapolis page noticed a livestream of the apparent 4chan users and captured it.

There is a chance the video and rumors about 4chan users being involved in the shooting could just be an elaborate attempt to troll Black Lives Matter activists and mainstream media outlets, as Vocativ noted, and added: “In another video uploaded November 20, which appears to be a series of clips edited from a livestream, a masked man in a similar desert camo jacket has a patch showing ‘/k/'”.

A different video seen by a Gawker writer shows men who appear to be SaigaMarine and BlackPowderRanger approaching a crowd of people. “All these folks here should get the justice and peace that they deserve. We need to reach out to our communities, especially our melanin-enriched communities,” BlackPowderRanger said in what appears to be an attempt at trolling, Gawker.com reported. The website didn’t note when the footage was taken.

On the /k/ board Tuesday, users claimed “SaigaMarine” was arrested.

Users asserted he was the “Hispanic male” and the “second suspect in [the] shooting,” as referenced by Minneapolis Police in a Twitter bulletin. They also made jokes about his age, ethnicity, and height.

The shooting took place near a police precinct in Minneapolis where protesters had been demonstrating over the police shooting death of Jamar Clark, an unarmed black man.

At the same time, there was also disinformation being spread on Twitter and relevant 4chan boards on Tuesday saying Massachusetts-based YouTube comedian Sam Hyde was responsible for the shooting.