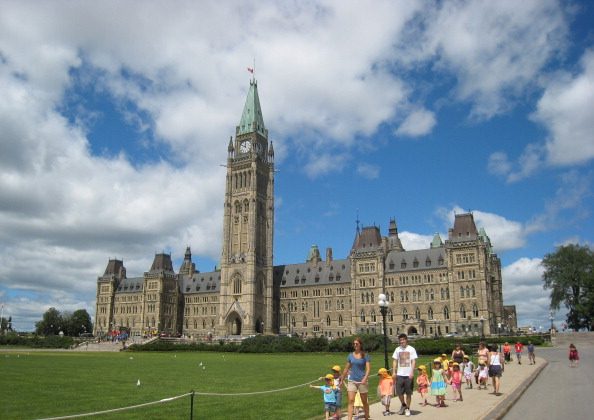 The national flag at the Canadian Parliament in Ottawa flies at half-mast on July 11, 2013. (Michel Comte/AFP)
Canada

Victoria Day 2014 is this Monday, and it’s considered national holiday, but it has a different name in Quebec, where it’s National Patriots Day

Walmart is only closed on Thanksgiving, Christmas, and Easter. It may have limited hours on Victoria Day, so check listings.

Target is also open. It may have limited hours on Victoria Day, so check listings.

Best Buy is also open, but it may have limited hours on Victoria Day.

Costco usually is closed on Victoria day but it’s worth checking local listings.

All city, state, and government offices are closed.

There’s no mail delivery and liquor and beer stores are also closed down.

Tourist destinations like the CN Tower and Vancouver Aquarium are open. Some museums and other tourist spots are also open.

Many businesses, grocery stores, convenience stores, and others are closed, but some are open.

“Victoria Day is a Canadian statutory holiday celebrated on the Monday preceding May 25 in every province and territory. It honours Queen Victoria’s birthday. In Quebec this holiday is called ‘National Patriotes Day’ (Journée nationale des patriotes),” says StatutoryHolidays.com.

“Victoria Day is also commonly referred to as the ‘May two-four weekend’ or the ‘May long weekend’ and it marks the unofficial start of the cottage season where cases of beer are consumed by hard working Canadians,” it adds.