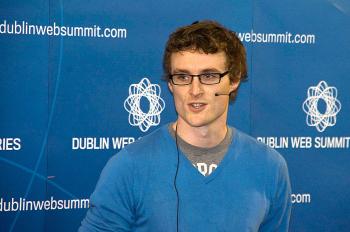 Epoch Times Staff
View profile
Follow
biggersmaller
Print
DUBLIN—A stellar array of founders of web technology companies where brought together in Chartered Accountants House on Dublin’s Pearse street last week, to celebrate their achievements and learn from each other.

The speakers included Jack Dorsey (who founded Twitter), Chad Hurley (who founded YouTube) and Niklas Zennstrom (the founder of Skype), to name but three. Each of these young men founded companies that have rapidly become a part of everyday life in the twenty first century.

They each gave a presidential style address of how they started their careers as entrepreneurs, and the numerous failures they suffered before they eventually achieved success.

The two day conference was full of success stories from Irish entrepreneurs who had taken the risk to build their idea into a profitable company.

Alan Coleman, who won the Spark Of Genius award at the event last year with the website he designed called GetitKeepit.com, gave two pieces of advice to new start ups: "You have to constantly look at your business, your technology, every aspect of your business to try and innovate," he said. Secondly, he urged them to be their own harshest critics.

Describing his company, he said “At a high level GetitKeepit.com was the entity under which we won the last web summit, and that is a free site operating in Ireland that allows you to pull all your utility bills together automatically into one account and have it analysed.”

He said that part of the success of his company over the last year was because more people wanted to keep track of every penny they were spending, and also because more utility companies wanted to move to paperless bills.

Mr Coleman said winning last year’s competition had a big impact on his company. "Being a start up can be complicated; you spend your time wheeling and dealing but ultimately you have to make money, you have to make profit and you have to throw yourself in … the business and the professional services we won were invaluable."

The winner of this year’s Spark of Genius Competition was a company called Datahug. Conor Murphy presented Datahug to the hundreds of engineers present.

He described Datahug as a web application that maps the digital relationships between people in business.
One of the judges commented that the company was "like LinkedIn on steroids, as it not only answers who knows who, but how well they know them".

Paddy Cosgrave, organiser of Dublin Web Summit, said “Spark of Genius is our idea for giving back to the tech community in Ireland, and we’re delighted to be able to offer such a fantastic prize. While money is great, what start-ups are really looking for is good advice and services.”

One of the most energetic speakers at the Dublin Web Summit was CEO of Jolt gaming, Dylan Collins. He introduced himself by saying, "I should warn you in advance I’m an entirely unreasonable person." But contrary to his assertion he seemed entirely agreeable and very positive in outlook, even complementing the efforts of the current Irish Government.

He said, "The reason I got involved in this company is because Ireland is still a great place to start companies." He added, "Enterprise Ireland are actually doing a good job, they can do other things better but they are not bad, so I wanted to give them a bit of a shout out."

He added that Ireland is currently the world's centre of online gaming and that this industry is worth millions, possibly billions to the country. "Ireland is one of the biggest online gaming hubs in the world – no one seems to know this. We should be shouting from the rooftops."