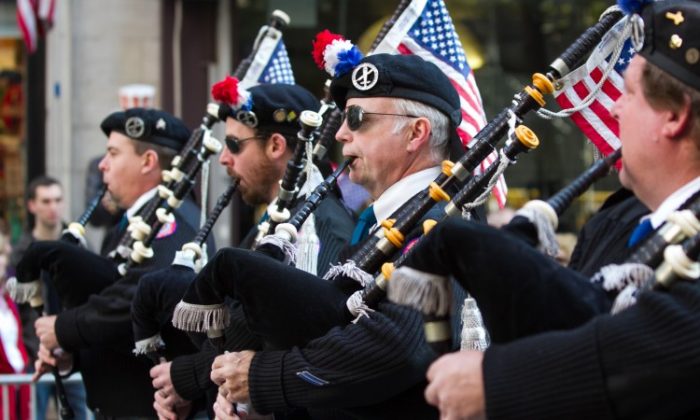 Members of the junior Reserve Officers Training Corps march at the Veterans Day Parade in Manhattan on Sunday. (Benjamin Chasteen/The Epoch Times)
US

NEW YORK—The pop of the snare drum, the boom of the bass drum, and the sound of marching footsteps echoed down Fifth Avenue Sunday, as crowds lined up and waved their American flags to say thank you during the annual Veterans Day Parade.

Veterans from all branches of the military were represented, and from all the wars spanning the last 70 years, a welcome sight for some. “It is great because when we first came home, we really didn’t have a warm welcome,” said George, a retired Marine who asked his last name not be used.

George, who served from 1963 to 1967, said when he got back from Vietnam the sentiment was not one of gratitude, but of resentment because of the outcome of the war and the polarizing effect it had on the country politically. He didn’t talk about his experiences for 10 years, throwing away much of his stuff from the time he served.

The tone changed in May of 1985 when then Mayor Ed Koch threw a ticker tape parade officially welcoming home the Vietnam veterans. George, who has been marching in the parade for over 20 years, said this year’s parade was one of the best turnouts since the 1985 parade.

George pointed to his fellow veterans and said, “A lot of these guys are still in [Veteran Affairs] hospitals. To have all these people waving flags and saying thank you is very healing, even though it has been a lot of years.”

Near the beginning of the parade a small group of 30 or so men of varying ages stood in their off duty green wool uniforms, many wearing Brodie helmets. Their uniforms, almost all original, represent a generation of soldiers who can no longer represent themselves—those who fought in World War I.

The last known veteran from World War I, Florence Green of the Women’s Royal Air Force in England, passed away in February of this year at the age of 110.

David Delucia, 57, from White Plains, N.Y., is not a veteran, however he hopes by wearing the uniform of soldiers from World War I, also known as the Great War, their memory will not be forgotten. “It is a wonderful way for us to respect the veterans that fought in the wars,” Delucia said.

Delucia and his group, from the Great War Association, an informal group of World War I history buffs, try to keep everything as authentic as possible when representing the veterans of World War I, right down to the flag. Delucia carried a worn and yellowed 48-starred flag, harkening back to era before Hawaii and Alaska were states.

“This flag is a symbol, but it is really about the people,” Delucia said.

Long before Hurricane Sandy ravaged the city on Oct. 29, the Coast Guard was chosen as the featured branch at this year’s Veterans Day Parade. The past two weeks, the country’s least heralded branch of the military has earned it.

The Coast Guard helped pump water out of the Battery Tunnel, restored shipping channels in the Hudson and East rivers, cleaned up oil, and even performed a rescue mission off the coast of North Carolina before Hurricane Sandy made landfall in New York.

“It takes a lot to jump out of a perfectly good helicopter into a hurricane, but they did it and saved 14 people,” said commandant of the Coast Guard, Adm. Robert J. Pappa Jr. at a wreath-laying ceremony at Madison Square Park before the parade.

“Hurricane Sandy, once again, reminds us the power of the sea and the destruction it can bring. But it also reminds us when things are at their very worst, and when our country needs them the most, our men and women in uniform are always at their very best.”