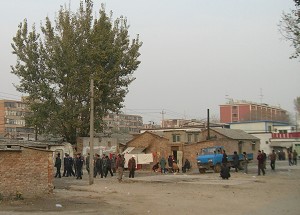 CHINA—During the Communist regime's National People's Congress session early this year, many long-time petitioners in Beijing were arrested and later sent to labor camps. Ms. Hao Wenzhong, an elderly woman in her 70s, is one of them. Ms. Hao is now renowned for being arrested 200 times. This time she will be locked up in a labor camp for 15 months.

Ms. Hao was born in Heilongjiang province, but her residential registration has been cancelled without her consent. She often stays in Beijing for long periods of time to make appeals. Her journey started 30 years ago, in 1977. Many media and scholars have interviewed her. Many people have written her story.

Dr. Xu Zhiyong is one of them. In one of his article, Xu said he personally went to the Petition Village in Beijing to interview Hao and her grievance is as follows:

During the Cultural Revolution, although Hao and her husband repeatedly expressed their loyalty to Chairman Mao, her husband was still denounced at a public meeting and beaten to death that night for being “the head of reactionary gang.” To redress the wrongs done to her husband, Hao started her appeals in 1977.

The authorities have dealt harshly with Hao. After some of her other appeals, Hao has been confined in the mental hospital in Qiqihar City, the Changping detention center, etc. In recent years, she rented two houses in the Petition Village in Beijing and made her living by renting sleeping space in these two small houses.

The elderly woman's small “hotel” always ends up in a disastrous state whenever the authorities raid the Petition Village. The bedframes and bedding are frequently demolished and thrown away by the authorities.

Comparing impressions form past interviews with Hao, this reporter feels that the elderly woman's memory is deteriorating; she speaks less and less clearly. In 2006, one of Hao's friends, Du Mingrong, told the reporter, “Ms. Hao's memory is poorer than before. She's old. Her living conditions are so bad. I'm not sure how long she can keep on.”

In March 2007, during a session of Congress, Hao bravely stopped a car in Tiananmen Square. Although the passenger in the car turned out not to be a member of Congress, she was arrested and now sentenced to 15 months in a labor camp.

This marks the 200th time Hao has been arrested by the authorities for making appeals.