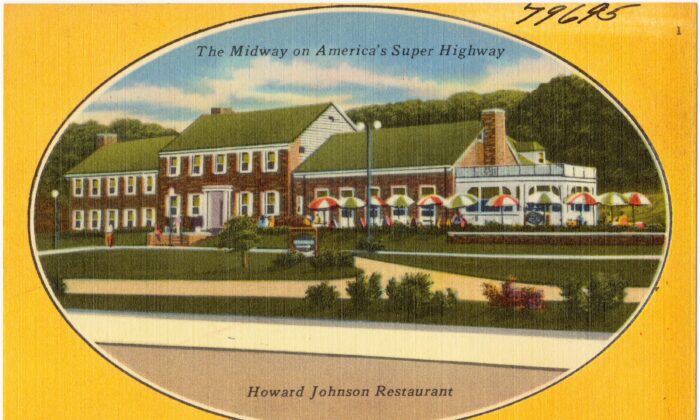 Vestiges of Americana Fading Before Our Eyes

The only thing that particular location had in common with the fried clams and 28 flavors of ice cream the restaurant was famous for was maintaining the iconic orange roof that signaled to families for generations that they were pulling up to a place they could trust for known comfort food at reasonable prices.

What began in 1925 as Howard Deering Johnson took over his father’s struggling medicine store and soda fountain grew because of his keen understanding of what people were looking for. The then-27-year-old native of Quincy, Massachusetts, had vision and understood people. He improved the quality of the ice cream, added well-prepared food for customers to eat, and soon, went from deeply in debt to flourishing.

Four years later, Johnson opened a second restaurant and was selling his popular ice cream at stands along the beach.

Unofficial-official Howard Johnson’s restaurant historian Walter Mann details on his HoJoLand.com website that Johnson was a bit of a visionary who saw the love Americans had for the open roads and their cars and understood that as the U.S. road system expanded, families would be packing up their vehicles.

And he was eager to expand.

“He conceived a new idea: franchising. Johnson talked another businessman into using the ‘Howard Johnson’s’ name on a Cape Cod restaurant, in return for a fee and an agreement to buy food and supplies from Johnson. The idea worked well for both men, and Johnson made similar agreements with others. That was the beginning of restaurant franchising, a system that has since been replicated by countless others,” Mann wrote.

Food rationing dragged the business down during World War II, but Johnson kept the company alive by providing food for military installations, defense plants, and schools.

By the 1950s, there were more than 400 Howard Johnson’s restaurants operating across the country, and at the end of that decade, Howard D. Johnson passed the business on to his son Howard B. Johnson. By the mid-’60s, its sales exceeded those of McDonald’s, Burger King, and Kentucky Fried Chicken, making it the second-largest food provider in the United States, second only to the U.S. Army.

So, what went wrong? Why are we not getting ready to celebrate HoJo’s 100 years of existence in 2025? Howard D. had done everything right, despite inheriting a deeply-in-debt business, a stock market crash, a Great Depression, food shortages, and a war throwing land mines in his direction every few years. And he had developed a brand that was trustworthy, visually recognizable from a mile away, and located on just about every road in America, along with all the turnpikes and highways.

Sort of reminds you of another American company—Sears, Roebuck and Co.—which by all accounts should have been the Amazon of today and is instead languishing in bankruptcy, a shell of what it once was.

Sears was the quintessential American company, the catalogs of which defined what we wore, what appliances and tools we used, and what we wanted for Christmas. It also fixed our cars, sold us tires, and would send us plans and all the supplies needed to build our homes.

It knew everyone’s address because of its “Wish Book” catalog, and its stores, large and small, were located on everyone’s Main Street business district or in suburban malls.

There’s no reason at all why Sears couldn’t be the Amazon of today. It had the footprint in the public’s hearts and in their backyards to make that happen, beginning with customer trust, information, and access.

In the same vein, there’s no reason why Howard Johnson’s couldn’t still be delighting parents with crispy fried oysters while their children decide which of the over two dozen ice cream flavors they would soon be devouring. It didn’t have to be this way, and yet here we are.

Sears was made great by the innovators who created it. Sears began as a mail-order watch company, then morphed into a larger mail-order operation that sold a variety of household essentials at a discounted price to rural areas—think farmers, small towns, and villages—who had little access to retail stores.

Richard W. Sears understood customers’ needs because he understood and experienced their challenges, which is easy when you come from Stewartville, Minnesota, where the population at the turn of the 20th century was under 800. You’re in touch with the customer when you’re the customer. In short, he was able to put himself in their shoes.

Howard D. Johnson, a World War I veteran who inherited his father’s soda shop, knew people. Despite failing a lot more times than succeeding in his early days, he never stopped trying, innovating, and learning what his customers wanted.

The beginning of the end for both companies began as they kept getting sold and resold and sold again to venture capital groups, the operators of which never once ate at a HoJo’s, or bought Sears auto parts to fix their car, or had their children circle what they wanted for Christmas in the Wish Book. When you share little in common with your customers, how do you innovate to keep them and their children?

The public loves nostalgia. It would have loved to bring its children or grandchildren to the same place their parents took them on their way to the shore. They also love consistency. You knew what you got and where to go to get it every time you walked into a Sears.

Last week was more than just the end of Howard Johnson’s. It marked one more place in our culture that lost touch with its customers because the owners had little in common with them. In short, they lived in the super ZIP codes of this country and ate and shopped in a universe far different from their customers. They still made money regardless of whether anyone came to shop or eat.

And, unlike many of us, they didn’t mourn when someone turned the lights off for the last time in Lake George.