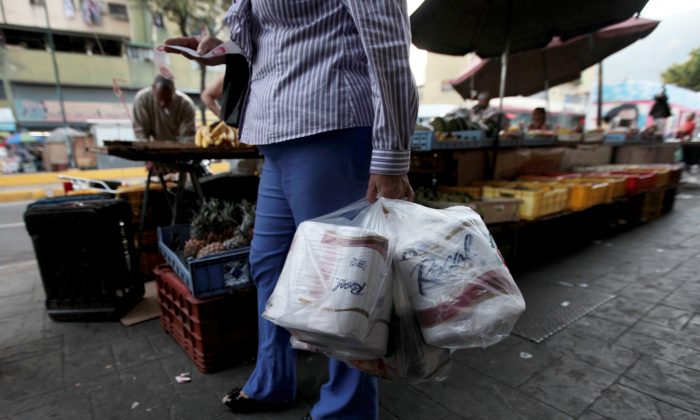 A woman who just bought toilet paper at a grocery store reads her receipt as she leaves the private store in Caracas, Venezuela, on May 15, 2013. First milk, butter, coffee, and cornmeal ran short. Now Venezuela is running out of the most basic of necessities—toilet paper. Economists say Venezuela's shortages stem from price controls meant to make basic goods available to the poorest parts of society and the government's controls on foreign currency. (AP Photo/Fernando Llano)
Americas

CARACAS, Venezuela—Economic mismanagement reached a new climax in Venezuela this week. Many shoppers were left without toilet paper despite the socialist government’s promise to import 50 million rolls.

“Even at my age, I’ve never seen this,” said 70-year-old Maria Rojas. She said she had been looking for toilet paper for two weeks when she finally found it at a supermarket in downtown Caracas.

Thousands of rolls flew off the store’s shelves as consumers streamed in and loaded up shopping carts Thursday morning.

“I bought it because it’s hard to find,” said Maria Perez, walking out with several rolls of paper.

“Here there’s a shortage of everything—butter, sugar, flour,” she said. But the latest shortage is particularly worrisome “because there always used to be toilet paper.”

Economists say Venezuela’s shortages of some consumer products stem from price controls meant to make basic goods available to the poorest parts of society and the government’s controls on foreign currency.

After a decade of “Chavismo” and command economy mismanagement, it seems Venezuela’s economy is spiralling out of control and the shortages are just one symptom.

In February, Venezuela announced it was devaluing its currency from 4.30 to 6.30 Bolivars per dollar, a drop of 37 percent. While the language of the move suggests that this operation is as easy as pressing a button, the reality is different.

Venezuela has to print up enough currency to buy dollars in international markets to bid up the dollar’s rate to 6.30. The money actually never leaves Venezuela, but sticks around to create inflation. In addition, national companies will now have to pay up 37 percent for imported goods. This feeds through the cost structure of companies, causing massive inflation (prices have risen 30 percent over a 12-months period).

To prevent popular uprising, Venezuela implemented price controls, cracking down on companies not complying with the set price. This means that businesses need to provide products at a loss and simply stop production, which leads to the product shortages.

President Nicolas Maduro, who was selected by the dying Hugo Chavez to carry on his “Bolivarian revolution,” however, claims that anti-government forces, including the private sector, are causing the shortages in an effort to destabilize the country.

The government this week announced it would import 760,000 tons of food and 50 million rolls of toilet paper.

Commerce Minister Alejandro Fleming said “excessive demand” for tissue had built up due to a “media campaign that has been generated to disrupt the country.”

He said monthly consumption of toilet paper was normally 125 million rolls, but current demand “leads us to think that 40 million more are required.”

“We will bring in 50 million to show those groups that they won’t make us bow down,” he said.

As for the motivation of the devaluation, James Rickards, author of the bestselling book Currency Wars says that countries devalue to boost growth through exports and get rid of debt.

“When you have a world economy that doesn’t have enough growth, countries are tempted to steal growth from their trading partners by devaluing their currency.”

The problem is that the long-term costs outweigh the short-term benefits, pointing to Venezuela’s rising import costs and price controls.

“Maybe exports are cheaper, but imports are more expensive. That’s a net cost to the economy. It’s not the free lunch [that people think it is]. Maybe it’s a good deal for [export companies] … for everyone else it’s not a good outcome.”