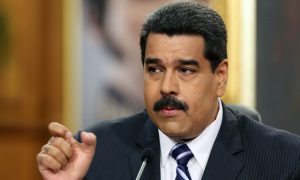 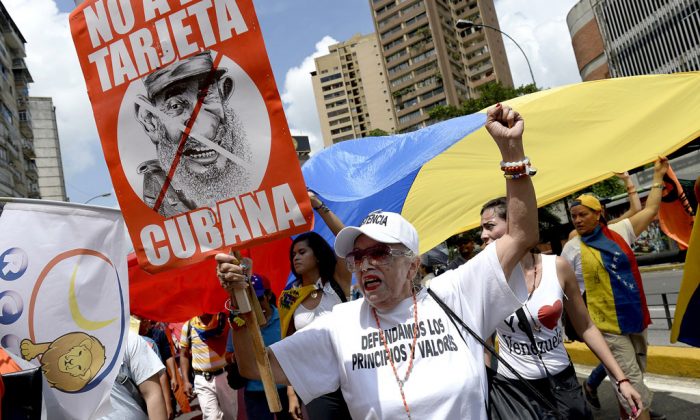 People march during a protest against the government of Venezuelan President Nicolas Maduro, in Caracas on Oct. 18, 2014. Public unrest is growing in Venezuela. (Federico Parra/AFP/Getty Images)
Americas

With the Venezuelan government bracing for violent unrest and trying to ensure the loyalty of its military, the People’s Republic of China has stepped forward with cash and weapons.

When the first arms shipment arrived, Venezuelan Defense Minister Vladimir Padrino López expressed his gratitude and support for Venezuelan President Nicolás Maduro. According to IHS Jane’s, a leading intelligence company, he also sent a Twitter message reaffirming the military’s “loyalty to the constitution and the president.”

“Maduro is making sure the military is both well armed and well paid so that they will suppress internal dissent.”
— Robert Bunker, U.S. Army War College

“The military leaders are serving much like the captains of a Praetorian Guard,” said Robert Bunker, adjunct professor at the U.S. Army War College Strategic Studies Institute, referring to the guards of the Roman emperors.

“They are swearing loyalty to Hugo Chávez’s chosen Bolivarian successor and not to the citizens of the Venezuelan state,” Bunker said. “In return, they are being taken care of by the president in terms of the weapons shipments.”

The shipments come on the heels of several large-scale anti-government protests in Venezuela, and other social problems in recent months.

Jane’s referenced the latest development in relation to the Venezuelan crude oil price falling to $48 a barrel on Dec. 28, 2014. The falling oil prices have helped tip an economy with the highest inflation in South America into recession.

The Venezuelan government may soon announce economic measures to cope with falling oil prices, according to Jane’s. These measures—details of which have not been released—have been opposed by top members of the ruling United Socialist Party of Venezuela.

The resignations and restructuring of the government were part of what Venezuelan President Nicolás Maduro called a revolution within a revolution.

Following the change in the government, China started gaining a deeper foothold in Venezuela, and internal unrest reached a boiling point. Venezuela, meanwhile, was facing a sovereign debt default—an inability to pay back its debt.

In mid-September, Venezuela signed several agreements with China. The two countries made a currency swap worth $11 billion, and Venezuela received Chinese loans to fund energy and infrastructure projects. Jane’s reported on Sept. 18, 2014, that the exchanges would likely give China a stronger role in Venezuela’s key economic sectors.

It noted the deals would create “an unequal relationship in which China is likely to have the upper hand.”

Venezuela’s economy declined 4 percent in the first nine months of 2014, compared to the previous year. In November 2014, inflation was at 73.5 percent according to the official figures.

Venezuela also has to pay back $30 billion in foreign denominated debt in 2015, and despite the $4 billion loan from China, its currency reserves are now at $22 billion.

In September, social unrest was growing. Protesters set fire to four cars and three motorcycles in Norte de Santander, after the government shut down the Venezuelan-Colombian border.

Venezuela’s chief of Strategic Regional Defense claimed the protests were from Colombian gangs and former right-wing paramilitary groups, according to Jane’s on Sept. 30, 2014.

Just one day later, Robert Serra, a lawmaker from the ruling United Socialist Party of Venezuela, was murdered in Caracas. The murder followed a similar killing of the former head of Venezuela’s intelligence services, Eliecer Otaiza, in April.

By mid-October, Venezuela was seeing large-scale protests against blackouts, food shortages, and escalating crime. According to Jane’s on Oct. 16, 2014, the Democratic Unity Roundtable, a coalition of democratic parties, called for protests and labor strikes.

Amid the growing turmoil, Maduro swore in Gen. López—the general who recently affirmed the Venezuelan military’s support for the government.

Maduro was showing signs of being concerned about whether the military was still loyal. López received his position when Maduro was reshuffling defense leaders and increasing their salaries.

After López was sworn in, Jane’s reported on Oct. 27, 2014, “Maduro requested the armed forces remain loyal to the homeland, its ideology, doctrine and training, and announced a 45 percent increase to the Venezuelan armed forces’ salaries, effective from 1 November.”

“I think President Maduro is following the advice of the Roman Emperor Septimius Severus, who very much promoted a ‘police state’ during his reign,” Bunker said. “On his deathbed in 211 A.D., the emperor told his sons ‘Be harmonious, enrich the soldiers, and scorn all other men.'”

“Given the economic implosion of Venezuela in the face of drastically falling oil revenues,” Bunker said, “Maduro is making sure the military is both well armed and well paid so that they will suppress internal dissent and stay loyal to him.”

There is also growing unrest within the Venezuelan military.

“Not all the soldiers are loyal to Chavez-Maduro regime,” said Graça Salgueiro, a journalist specializing in Latin American politics at the Brazilian newspaper Media Without Mask, in an online interview.

“The faithful who still scream ‘homeland, socialism or death. We will win!,’ are those high-ranking officers who financially benefit from drug trafficking with FARC [Colombia’s left-wing guerrillas, who are heavily involved in drug trafficking to the United States and Europe], with whom they have close relations,” Salgueiro said.

“Those generals are known in Venezuela as the ‘Cartel Suns’ [these generals wear an emblem of the sun on their uniform in place of the customary star] and participate in major corruption schemes” long known to U.S. intelligence, she said.

Salgueiro said the weapon shipments from China will likely only appeal to Venezuela’s military faction still loyal to the Venezuelan leadership—mainly those in command.

She added that the weapons may be used to suppress internal revolt, but the Venezuelan government also has the “Bolivarian militias and other small groups, all heavily armed and ready to suppress any manifestation as they did in February last year, causing 39 deaths and hundreds of injuries.”

The new weapons, along with previous shipments from Russia, Salgueiro said, “can be to increase the arsenal against ‘the U.S. Empire.’ after the decree signed by President Obama in late 2014 that canceled the visas of dozens of high-ranking government and military officials, in addition to confiscation of goods—buildings, stables and a lot of money in U.S. banks—of these people.”

Maduro has clear reason to try to win over the military. At least 43 people were killed in anti-government protests between February and June, and cases of arson continued in December.

Overall, public support for Maduro is waning. The country’s businesses are failing, taxes are increasing, and while China bailed them out in the short term the deals will likely harm Venezuela in the long term. And while the economy is crumbling, social unrest is increasing. Rather than address the problems, the Venezuelan government appears to be blaming and lashing out at rival political parties.

Amid all the chaos, the Venezuelan government’s only card seems to have been to pad the pockets of military leaders, while investing in large arms shipments from China.

According to Bunker, Venezuela had close to 24,000 homicides in 2013, and is among the world’s most dangerous places to live.

“Gang violence, robberies, and kidnappings are rampant,” he said. “On top of this, protests rocked the nation during the early months of 2014, stemming from both high levels of violence and a failure of the economy to provide basic goods.”

When falling oil revenues are taken into the picture, and with it the loss of Venezuela’s economic foundation, the possibility of revolt becomes even more real.

“It does appear at a minimum that the leadership of Venezuela is gearing up for violent unrest,” Bunker said.

He added, “The question, of course, on everyone’s minds is will the Bolivarian government allow for legitimate protest to take place to vent societal tensions or, fearing coup potentials, immediately shut any protests down—which will only exacerbate the situation.”