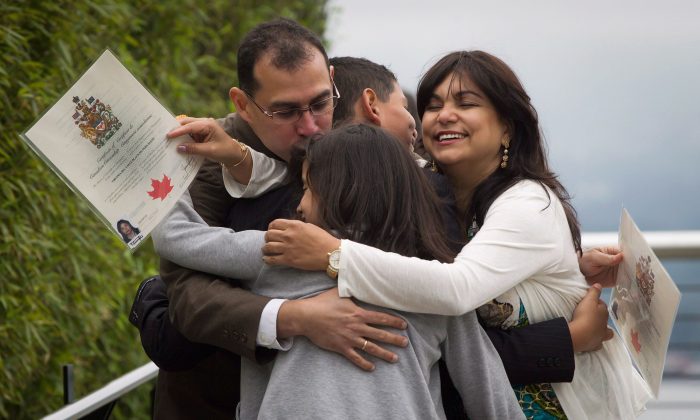 Adrian Pernalete (L) and his family, originally from Venezuela, participate in a group hug after being sworn in as Canadian citizens during a special Canada Day citizenship ceremony in Vancouver on July 1, 2012. A new Statistics Canada report has found that nearly three quarters of university-educated immigrants received their degrees outside the country. (The Canadian Press/Darryl Dyck)
Canada

A new Statistics Canada report has found that nearly three-quarters of university-educated immigrants received their degrees outside the country.

This figure has increased since 2000, with the majority of new or recently arrived immigrants (84 percent) having obtained their highest degree outside of Canada.

Titled “Differences in the location of study of university-educated immigrants,” the report found that immigrants’ education changes significantly depending on the country of origin. It also showed that the number of immigrants who achieved an education level higher than a bachelor’s degree did so outside their country of birth.

The country of origin with the highest proportion of foreign-educated was the Philippines (96 percent). Comparatively, France (74 percent) and China (76 percent) had the lowest proportions. However, the agency found the top 12 countries were separated by fewer differences than those who arrived in the 1990s and before 1990.

If they are coming in from a developing nation they tend to be discounted.
— John Shields, Ryerson University

According to Darcy Hango, a Statistics Canada analyst and one of the report’s authors, past Statistics Canada research has shown that there are differences in labour market outcomes, which make the study of the location important.

He also notes that immigrants with foreign degrees may not have credentials that are transferable, or that are comparable to those who are Canadian-born or educated. Similar findings have been noted in other countries, he adds.

A March 2010 report by the Toronto Immigrant Employment Data Initiative found that the average unemployment rate for all university-educated immigrants is double that of the Canadian-born.

“Those immigrants that tend to do the best tend to be those that get their degrees within Canada itself and that is because employers tend to have greater recognition of those degrees.” said John Shields, a political scientist at Ryerson University and a co-author of the 2010 report.

“If someone is coming in with an American degree or a British degree, then there is a high degree of recognition for them and so they tend to get treated more to the equivalent of our degrees. If they are coming in from a developing nation they tend to be discounted,” said Shields, who is also the acting director of Ryerson’s Centre for Immigration and Settlement.

Shields adds that barriers to work among immigrants tend to include variety of factors, such as language ability and “soft” skills as well as professional trade certification.

“While university education is a plus, how it is rewarded within the labour market tends to vary depending upon a whole variety of variables,” he said.