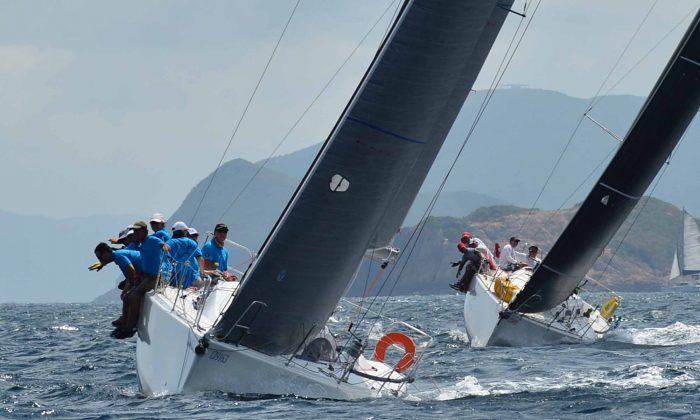 There was a moderate wind of about 7 knots on Saturday but conditions became quite rough for the Islands Race on Sunday with winds of 15 to 20 knots.

“EFG Mandrake” who only took part on Sunday won the Islands Race on corrected time.

“Talkinghead” topped the IRC-B Category with 2-Line Honours awards and the overall Regatta win with 7-points, “Dexter II” recorded a Line Honours win in Race-2 and came 2nd on count-back on corrected time with “Calamansi”, placed 3rd, both finishing on 10-points. Gaston Chan of “Calamansi” was in a strong position at the start of Day-2 but explained that the windy conditions and lumpy sea favoured the bigger, heavier boats. With his light weight crew he had to reduce sail to keep the boat upright and hence lost speed. He commented that he had never seen so many crew on “Mandrake” (1st in the IRC-A islands race) and added that longer boats went through the water better. That was certainly true of Jelik who was seen steaming downwind at high knots.

Sports Boats
After two wins on Day-1 of the Regatta “Merlin” looked like she would scoop the Sports Boat Regatta prize without difficulty but the high winds and a lightweight crew contributed to “Merlin” finishing in 3rd place in the islands race behind, “FreeFire 69 It’s My Pleasure” and “Good Vibrations”.

“Red Herring II” had a good lead as she rounded Bay Island Mark the second time and set off for home but she retired after realising she had taken a banned short-cut.

This put “FreeFire 69” and “Merlin” equal on 6-points for the Regatta with “Good Vibrations” on 9-points in 3rd position. “Merlin” retained 1st place on count-back but “Merlin” Skipper Steve Bourne explained that they were fortunate in that the rules changed a few years ago and under the old rule “FreeFire 69” would have won.

HKPN
A dead heat on corrected time between “Eclipse” and “Ichiban” in Race-3 made no difference to the overall Regatta Result in the HKPN Division. “Eclipse” took the overall win with 6.5-points with “Ichiban” 2nd on 9.5-points and “No One Else” came 3rd with 11-points.

“Bits and Pieces” came 1st in Race-1, “GA” topped the field in Race-2 but they could not maintain winning form finishing 5th and 4th respectively in the overall standings.