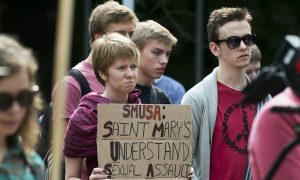 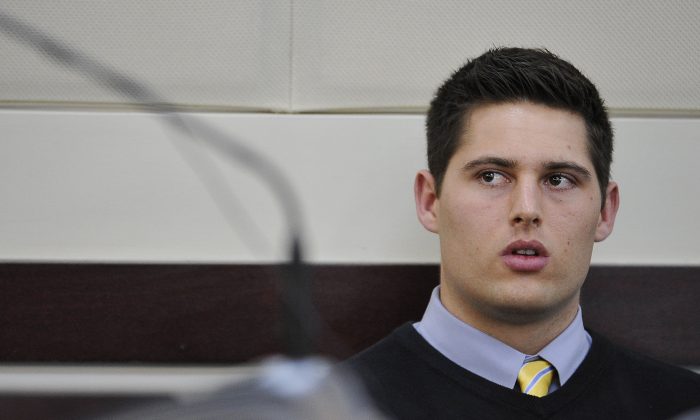 Even as first-time offenders, they could spend the prime of their athletic lives in a Tennessee prison.

They had been potential Southeastern Conference football stars. Vandenburg’s father broke down and wept as the verdict was read.

Vandenburg was the victim’s boyfriend, who egged three of his friends on in their sick conquest and repeated violation of the victim, according to video evidence presented at the trial. He passed out condoms. He filmed the assault. The group’s behavior seemed intended to degrade the victim as much as possible.

The boys were drunk or high at the time of the crime, and this was part of their defense. Batey’s attorney suggested his client was a good kid who arrived on scholarship and was corrupted by the campus culture.

Passersby in the college housing building had seen the victim naked in a hallway, and surveillance video reviewed by the college authorities proved the same. One of the shocking parts of the Vanderbilt case was that no one intervened, and afterwards, participants and their friends tried to cover it up.

Prior to the trial, a Vanderbilt investigation had found that there was not enough proof that the sex was not consensual. It was a typical response for college administrators nationwide, one that has raised serious questions about the ability of administrators to adequately respond to rape and sexual assault complaints.

The federal government is investigating Vanderbilt and 49 other universities for mishandling sexual assault cases.

The jury who heard the case roundly rejected that the boys were too drunk to know what they were doing, and blamed the college culture of binge drinking and promiscuous sex for the attack.

The federal government is investigating Vanderbilt and 49 other universities for mishandling sexual assault cases.

In rejecting this defense and issuing dire consequences for the perpetrators, the case may prove to be a watershed moment in the history of campus sexual assault in this nation.

Most college sex assaults don’t turn out this way. A recent Justice Department study found 80 percent of campus rapes went unreported between 1995 and 2013, compared to 67 percent in the general population.

Yet as more victims step forward to complain about not getting a fair hearing from school administrators, the problem’s visibility is growing.

“The spotlight is really been focused on this issue in the past year. I think it really will make a difference,” said Dr. Laura F. Salazar, an associate professor in the School of Public Health and Associate Dean for Research at Georgia State University.

Vanderbilt has made changes since 2013 to educate students about the importance of stepping forward to help others who may at risk of sexual assaults. They have started a bystander prevention program called Green Dot and started the conversation to educate students about the problem. In the 18 and a half months since the incident and the start of the trail, 26 sexual assaults were reported at the school, according to The Vanderbilt Hustler, the official student newspaper of Vanderbilt University.

Salazar has developed a web-based training program proven to reduce the likelihood that college-age men will be involved in sexual assaults, and to raise the odds that they will intervene to stop a potential assault, according to a press release.

“It’s focused on helping them not get in trouble, helping them communicate with their sexual partners and teaching them skills to intervene,” she said. “It’s not focused on ‘men are rapists.'”

She said some young men honestly do not understand what constitutes consent.

The rape victim had no memory of the assault. In court, she identified herself in the video, saying, “That’s me.” At one moment during the trial she seemed to become physically ill.

On the day two of her four assailants were convicted, she issued a statement thanking the criminal justice system for holding the defendants responsible for the violent crimes. Assistant District Attorney Jan Norman read her statement at court.

She said that having justice will help the victim to heal. In her statement, the victim said, “I am also hopeful that the publicity this case has received will lead to a discussion of how we can end sexual violence on college campuses. Finally, I want to remind other victims of sexual violence: You are not alone. You are not to blame.”

She has graduated from Vanderbilt with honors, and is going to graduate school.