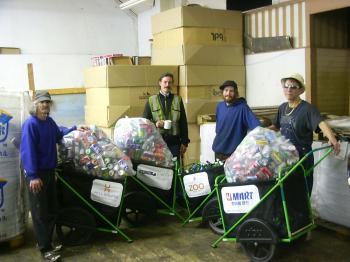 Binners and their Urban Binning Units, which can be pushed by hand or pulled behind a bicycle. (United We Can)
Canada

Joan Delaney
Senior Editor, Canadian Edition
Joan Delaney is Senior Editor of the Canadian edition of The Epoch Times based in Toronto. She has been with The Epoch Times in various roles since 2004.
View profile
Follow
biggersmaller
Print
Binners from Vancouver’s Downtown Eastside will play a prominent role in a recycling program set up to deal with what no doubt will be vast amounts of beverage containers discarded during the 2010 Winter Games.

About 68 binners—those who scavenge through garbage bins for reusable and recyclable items that can be exchanged for cash—will take part in the on-street recycling initiative, made possible thanks to a $50,000 grant to community organization United We Can (UWC).

“It's an opportunity to not only make a few extra dollars, even though it's only for a fairly short period of time, but it's also an opportunity to be involved with the Olympics,” says UWC executive director Brian Dodd.

Located in the heart of the Downtown Eastside, one of Canada’s poorest areas, UWC creates jobs for people who encounter barriers upon trying to enter the workforce. The non-profit’s thriving bottle depot was was created by and for Vancouver’s binners in 1995.

“Since that time we've grown considerably; we have about 150 people on the payroll right now,” says Dodd, noting that not many job opportunities exist for those employed by UWC.

“These are folks who are often dealing with mental illness, addiction issues, physical disabilities—you name it. And of course poverty, so there's a number of road blocks to getting decent employment.”

The containers will be transported in carts called Urban Binning Units. Binners use the carts to collect returnable containers from local businesses, apartment complexes, and special events. They then return them to UWC for recycling.

“Of the 20 million containers that went through this facility last year, the majority of those would have come through the binning community,” Dodd says.

The City of Vancouver’s grant to UWC provides a link between the Downtown Eastside and the Olympics, says Dodd, and “at least puts the binners out there with everybody else who's partying in the city.”

“Folks on the Downtown Eastside are just as interested in what's going on around them as anyone else in the city, and there's a lot of interest in the Olympics down here. This is just a way for the folks in the community to be a part of something that's much bigger than all of us.”