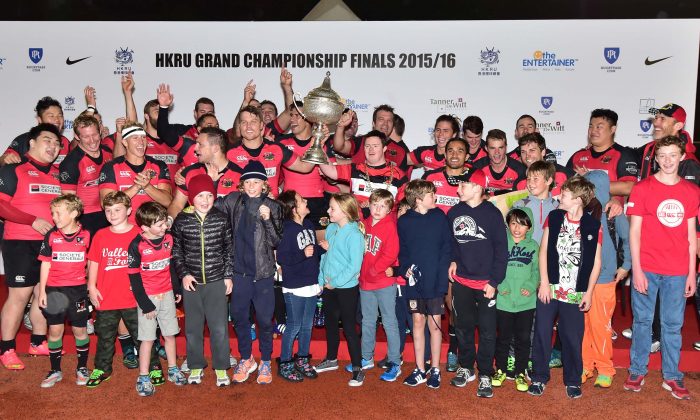 The first match was between Societe Generale Valley Black Ladies, defending their title, and unbeaten in 28 consecutive games, against the last team to beat them, two years ago, CPM Gai-Wu Falcons. Valley was the favourite; but Gai-Wu had beaten Valley in the past, pushed them close during the season, and the final proved to be an exceedingly tight and entertaining match. Maybe the weight of the occasion affected Valley, but credit to the defense and fitness of Gai-Wu, to force this match to the wire.

Gai-Wu led at half time, 0-3, through a penalty from fullback Aggie Poon. Valley defended for much of the half, as Gai-Wu forced them back and pressured Valley into uncharacteristic errors.

A strong start to the second half by Valley saw flanker Olivia Coady cross the tryline and flyhalf Bella Milo add the conversion. Valley led 7-3. Gai-Wu then threw caution to the wind, and began running the ball at Valley and producing incisive breaks and exposing frailties in the Valley defence. With 8minutes to go, Aggie Poon scored a deserved try, and kicked the conversion, to give Gai-Wu a 7-10 lead and a possible upset victory.

Yet, Valley knows how to win, even when the flow of the game goes against them. In a last-ditch effort, a critical line-break by Jen Mackay created some running rugby for Valley and they edged their way to the Gai-Wu line, being disciplined not to lose possession. And in the last minute of play, from a solid scrum, Olivia Coady bustled over the line to secure victory and silverware for Valley. Final score: 12-10.

On balance for the season, Valley is a deserved Champion, but based on this one match, Gai-Wu can feel a tad heartbroken, they came so close, and played excellent rugby, both in attack and defence, and almost pulled-off of an unexpected win.

In the men’s final, Valley was again the favourite. They had played Leighton Asia Hong Kong Cricket Club three times in the season, winning all three 25-0, 21-16 and 45-10. Fourth time lucky for HKCC? Maybe not.

HKCC started the game aggressively, but could not make the penalties, territory, and possession count, and the Valley defence stood firm for the opening 10minutes. With their first foray into the HKCC 22, the Valley pack drove HKCC over the line, for Leon Wei Hon Sum to score the opening try. The conversion was missed, but first blood to Valley, and they led 5-0.

Thereafter Valley controlled the game, but could not breech the HKCC defense, and by halftime, the score remained 5-0.

In the second half, Valley started brightly. At 48minutes, flanker Toby Venn, scored after Valley has pressured the HKCC tryline. This time, Ben Rimene’s radar was working and the conversion went over. Valley led 12-0: a lead that seemed unlikely to be threatened.

Valley dominated the game. They strangled possession, forced errors from HKCC, as much from frustration as needing to continually defend. Two more penalties from Rimene moved the score to 18-0, with 10minutes to go. On the touchlines the Valley faithful had already started the 40th celebrations.

HKCC rallied at the end, and after 70minutes managed a well-worked try through substitute centre Conor Hartley. Alex McQueen missed the conversion. It gave HKCC the satisfaction of points on the board, but it also sharpened Valley to ensure that was the first and last time, HKCC came close to the tryline.

Rimene added one more penalty on 76minutes to extend the Valley lead to 21-5. A final fumble by HKCC from yet another precision kick from Valley, cued the whistle and summed-up the game. Valley was simply too dominant. They never looked like losing, defended with discipline, controlled territory, possession and pace of play, from beginning to end. HKCC was solid in defence (hardly a line break from either team all match) but did not win enough possession to get continuity of play. Their line-out work was good, but in all other aspects were outplayed, Valley dominated, and their smaller, lighter pack, proved more mobile around the pitch.

Congratulations to Valley. They have been the benchmark team in both men’s and women’s rugby this season in Hong Kong. Their double-double-double (League and Championship) for both Men and Women was deserved and a fitting celebration for their 40th.