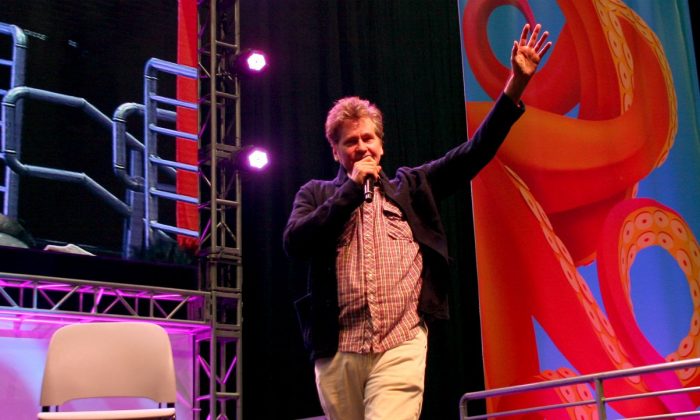 Val Kilmer made a rare public appearance for his TwainMania Foundation over the weekend, it was reported.

The “Top Gun” star appeared with binoculars around his neck while he appeared on the red carpet and later gave a speech. His son, Jack, 23, was also in attendance at the Los Angeles event, People magazine reported.

Kilmer is slated to appear in “Top Gun: Maverick,” which is a sequel to the 1986 blockbuster.

His comeback in the movie comes after years of speculation about the actor’s health. In December 2017, Kilmer confirmed that he had throat cancer.

During his two-year battle with cancer, the “Heat” actor suggested to The Hollywood Reporter at the time that it had “taken its toll.”

‘Top Gun’ (1986) Dir. by Tony Scott. As the Navy’s elite fighter weapons school compete to be best in the class, one daring young pilot learns a few things from a civilian instructor. With Tom Cruise, Val Kilmer, Kelly McGillis, Tim Robbins, Michael Ironside, & many others pic.twitter.com/xwLY4tkRdi

“Kilmer is not the screen god he was in 80s and 90s films like ‘Top Gun,’ ‘The Doors’ and ‘Batman Forever.’ A two-year battle with throat cancer has taken its toll, and a procedure on his trachea has reduced his voice to a rasp and rendered him short of breath,” the Reporter’s profile of him said.

But confusion has surrounded Kilmer’s health after he denied actor Michael Douglas’s claim that he was battling cancer in 2016. Before that, in 2015, a spokesperson told People that he was hospitalized “for a possible tumor.” Kilmer denied he had a tumor and only “had a complication.”

He later wrote on Reddit about the denial, reported People.

“[Douglas] was probably trying to help me ’cause press probably asked where I was these days and I did have a healing of cancer, but my tongue is still swollen altho (sic) healing all the time,” he wrote. “Because I don’t sound my normal self yet people think I may still be under the weather.”

Val Kilmer looks healthy after throat cancer battle as he goes to lunch with daughter https://t.co/E8Wtv45bCi

Kilmer credited his faith in helping his cancer recovery. The Hollywood Reporter also said that he was undergoing chemotherapy.

According to the Mayo Clinic, “Throat cancer occurs when cells in your throat develop genetic mutations. These mutations cause cells to grow uncontrollably and continue living after healthy cells would normally die. The accumulating cells can form a tumor in your throat.”