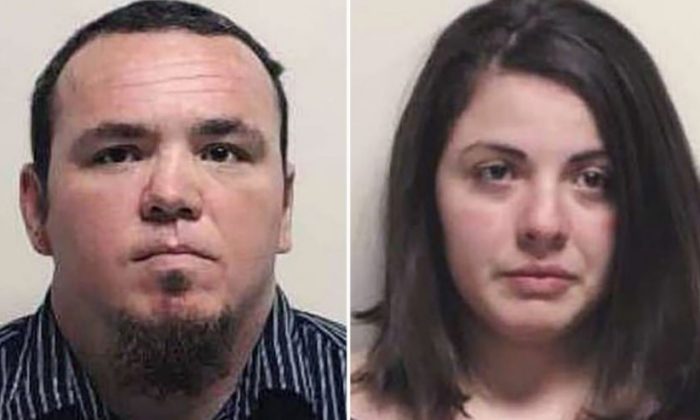 A Utah father and stepmother were arrested after police officers said an investigation indicated they had tortured a 9-year-old girl as a form of punishment.

Joseph Maseser Mitchell, 29, and Ilaria Catherina Mitchell, 28, were arrested on Dec. 13 in Provo and booked into the Utah County Jail, reported KSTU.

An investigation into possible child abuse was launched on Dec. 3 after the Provo Police Department received a report from the Division of Child and Family Services.

The 9-year-old girl, who has not been named publicly, told police officers that her father and stepmother “have punished her three separate times by putting a towel over her face and pouring water on it,” according to an affidavit obtained by Deseret News.

“The 9-year-old went into detail saying that Joseph and Ilaria would take her to the bathroom and tie her hands behind her back. They would then hold her down in the bathtub and place a towel over her face and pour water on it,” the affidavit stated. “The 9-year-old stated that she cannot breathe and it hurts when this happens.”

According to the Merriam Webster dictionary, waterboarding is an interrogation technique in which water is forced into a detainee’s mouth and nose so as to induce the sensation of drowning.

“An interrogation technique simulating the experience of drowning, in which a person is strapped head downwards on a sloping board or bench with the mouth and nose covered, while large quantities of water are poured over the face,” according to Oxford Dictionaries.

The description is similar to what the 9-year-old was allegedly put through.

The girl’s stepmother also allegedly punched her, which caused her nose to bleed.

Doctors who examined the girl found marks on her wrist that would be consistent with her hands being tied up.

“The emergency room staff observed some marks on her wrists which led them to alert the division of child and family services,” Provo Police Department Sergeant Nisha King told WKRC.

Police officers said they found a credit card on Joseph Mitchell when he was being booked into jail that was in his 7-year-old nephew’s name. In addition to a child abuse charge, he is facing unlawful possession of a bank card.

The girl’s biological mother, Brittany Calabrese, who lives in Texas, told WKRC about the alleged waterboarding: “She’s nine, nine years old. That is torture of a child.”

She said that when she first heard about the punishment from Child Protection Services, she couldn’t believe it.

Calabrese added to ABC 4 that Mitchell voluntarily gave the girl up to the state and that the girl was placed in foster care.

The mother is attempting to regain custody and previously planned to have her visit for Christmas, but according to ABC, that’s now not going to happen.